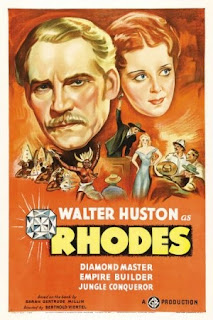 Although the film lays claim to a balanced portrayal of Rhodes (Walter Huston), mostly by making clear that he was a difficult man to like, single-minded and uninterested in opposing views, there's no real attempt to assess the man's actual impact and legacy in Africa: the film is so abbreviated that it mostly centers on a few personal relationships, jumping from one incident to the next over the years with little wider context, and implying that Rhodes laid claim to vast swathes of territory through sheer will (the film uses the term "superhuman" to describe its subject at one point).

It goes almost without saying that the film has essentially no interest in the impact of Rhodes's policies on Africans - the first African we meet is dismissed as untrustworthy, to be subjected to humiliations by his white bosses, and the only African character of any real note, Lobengula, the king of the Ndebele, is portrayed as a pathetic dupe, though the film doesn't linger over his fate or that of his people. There's marginally more interest in the Afrikaners, as represented by Paul Kruger (an arresting performance by Oscar Homolka), though the film implies he can be bought. Near the very end, Rhodes concedes that one African chief had the soul of a poet, given the man's choice of burial place; Rhodes's own similar final resting place comes across, then, as an act of intellectual theft...

As was the case for Sanders of the River, released the previous year, the film is split between studio sequences shot in Britain and location footage that is occasionally, and unconvincingly, patched together with the main players. The sections shot in Africa (based on the credits, they appear to have been filmed in Botswana and South Africa) are of some historical interest: these areas didn't appear onscreen much, and the mining and claim scrabble sequences give a fairly vivid sense of the realities of the mineral rushes of the period.

Where do you get hold of movies like these ones?

That one was on the streaming component of Netflix, but I get them from all kinds of places - friends' collections, the University's library, Netflix, occasionally from downloads if they aren't available on DVD, and even Youtube for things I have not found anywhere else. There are quite a few older movies on Youtube, chopped up into pieces...