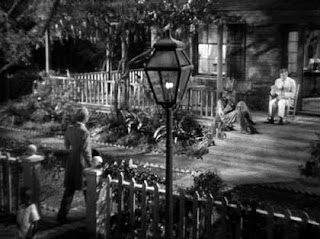 Judge Priest is a troubling and at times beguiling film: it weaves a captivating down-home atmosphere of 1890s Kentucky but the film's attitude to its black characters, even if rather better than most films of the period, leaves a puzzling taste, never more so in the scenes featuring Stepin Fetchit, an actor whose legacy still hasn't been adequately examined. While Fetchit profited from his career in movies, the price sometimes seemed rather high given his slow-witted, near-incomprehensible drawl and the overall portrait of sloth that reinforced so many (lazy) clichés. While Ford's film is perfectly happy to cast white characters in an unappealing light too - as country hicks, judgmental bigots, and so forth - the worst of the indignities do seem to be reserved for the black characters, not least when they are asked to break into a spirited rendition of "Dixie".

Elsewhere, though, Ford achieves a terrific sense of small-town place through the titular character, played by Will Rogers. The Judge is himself not averse to a spot of work-avoidance, and indeed that is the source of his bond with Fetchit's character, Jeff Poindexter, with whom he goes fishing. There's wonderful, wry comedy in the Judge's attempts to broker the peace both in the wider town and within his family: he's a political animal quick to spot others' weaknesses and vanities. The film's strongest sequence strips the Judge of his own vanities as he speaks in moving terms to his dead wife and child before turning in one evening; there's a moment where he touches their portrait, commenting on damage to the frame, that's heartbreakingly real, perfectly capturing the sense that this is just a brief extract from a much longer, if one-sided, conversation.