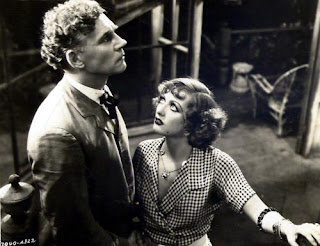 1932, US, directed by Lewis Milestone

Drawn from a stage play, and previously filmed in 1928 under the original title of Sadie Hawkins, Lewis Milestone's version retains a sense of the material's origins notwithstanding his occasional attempts to "open up" the material with brief forays to the outside world: the overwhelming majority of the film takes place in a creaky store/bar/boarding house that functions as a refuge from the driving monsoon of Pago Pago.

Indeed, apart from a few sections of "documentary" background which don't feature the main players, almost all of the action transpires on the ground floor or its various verandahs; Milestone makes use of crane shots and a surprisingly mobile camera to give the action a more cinematic profile. An early shot that circles around the cast, and the room, is repeated to comic effect a short time later, although those attention-getting flourishes are gradually de-emphasized as the darker heart of the story emerges in a confrontation between Sadie (Joan Crawford), a prostitute in search of a new life, and an inflexible man of God, the Reverend Davidson (Walter Huston), who sees Sadie as either a conversion project or an evil that must be cast out.

The pre-Code elements of the film aren't hard to find. Davidson is explicitly likened to a witch doctor by a perceptive local woman, and as the film progresses his maniacal tendencies become ever deeper, with Milestone shooting Huston such that his eyes are barely visible, a frightening character who might have wandered in from a Universal horror film of the period rather than from the pulpit. Although the character lacks much in the way of nuance, it's not hard to imagine how effective a stage actor Walter Huston must have been: a key scene where he declaims, over and over, the Lord's Prayer, is mesmerizing in its effect (within the film and for the viewer). Joan Crawford is allowed a degree more subtlety, her character struggling with a variety of choices for her future, although she's much more compelling when Sadie's in zesty flow with a string of men following in her wake (not unlike her turn in the same year's Letty Lynton). Sadie's comprehensive turnaround under the brow-beating of the preacher never seems entirely credible given her earlier brash self-confidence.

I was most taken with actor Matt Moore, given his unmistakable Irish accent; his character, a doctor who's a kind of counterweight to Huston's preacher, is a thoroughly decent, open-minded man. Despite his origins, I'd never heard of Moore, but he and his siblings Owen (Mary Pickford's first husband), Tom, Joe, and Mary formed quite the silent-era acting dynasty, with hundreds of screen credits between them - Meath's biggest Hollywood exports until Pierce Brosnan. Although Matt had a very healthy career in the silent era, with numerous lead roles, by the early 1930s his parts were getting smaller, and he's uncredited for most of his final two decades onscreen. He turns in a fine character performance here, sympathetic and humane in his dealings with Sadie, and authentic enough that I briefly wondered if he was an actual doctor.