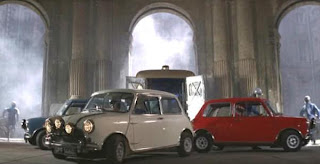 I saw this years ago on television, and remembered only the extended chase scenes involving three colour-coordinated Minis, though half of the chase seems as much an excuse for automobile choreography as it is an actual escape attempt. By contrast, I had no recollection of the surprisingly lengthy preamble narrating a variety of Michael Caine escapades, nor of Noel Coward's royal-obsessed crime kingpin, who lives in the lap of luxury inside Her Majesty's prison bars. The cocky Cockney act is inevitably somewhat dated at this stage - there's finally some questioning of the romanticization of London's criminals, though these fellows are mostly of the non-violent type - but the chase sequence remains entertaining, and the cliffhanger ending, which I'd also forgotten, is impossible to imagine these days in a similar caper film.