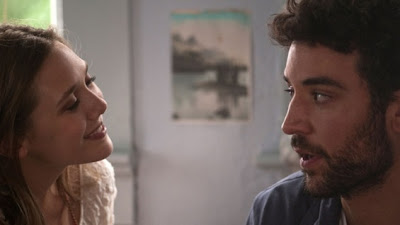 I'd never heard of Liberal Arts before it popped up on an airplane screen, but it proved a more than palatable diversion -- it's a film that's insistently non-zeitgeisty, particularly given its college-campus setting, with no mention of the Internet and barely a cellphone, the characters connecting instead through hand-written letters, books, and burned CDs. The conceit is a little overdone, even in a film that makes no real pretense to realism, and yet the insistence on the idea of communication that requires an attention span has its own attractions. I'm only familiar with Josh Radnor from the occasional episode of How I Met Your Mother: he's a competent director, very generous with his actors, which leads to some enjoyable supporting performances although not every role feels fully conceived, as though there was an idea for a diverting scene or two rather than an actual character. Still, there are a couple of lovely moments scattered through the film, none more so than the sly glance Elizabeth Olsen shoots Radnor's way when she's assessing the impact of her initial romantic forays.