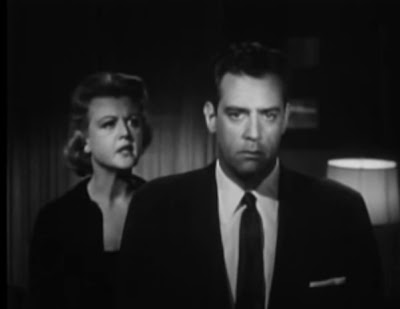 A rather nice meeting for two actors probably best remembered these days for small-screen roles -- a hulking Raymond Burr in his pre-Perry Mason days, and Angela Lansbury straying very far indeed from Jessica Fletcher territory, as the fatalest of femmes. On this occasion, at least, Lansbury's not entirely convincing in the role -- as depicted onscreen, she seems far too passive to really make us believe in her character's cynicism, with the spotlight remaining more firmly on Burr (as the shot above might suggest). The set-up is rather a stretch, albeit very much in the noir mould, with Burr narrating events that lead him to make a plea something along the lines of the give-it-all-away title, but the night-time atmospherics and unusual casting make the twists well worth persisting with.

This is an entry in my Watching Movies in Africa project: the film was screened in the late 1950s in Ghana, though I have not been able to gather whether it was a popular offering. I would suspect that the relative lack of action and the sustained dialogue scenes meant it was only screened a handful of times, though as an independent American production it probably didn't cost much to rent.