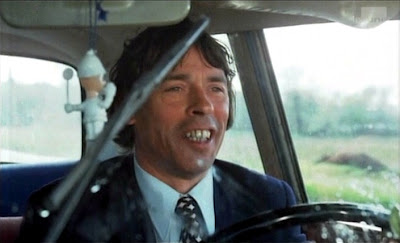 This is a contribution to the Late Films Blogathon, hosted by David Cairns, the wizard behind the curtain at Shadowplay.

We get our first glimpse of Jacques Brel as he pilots a small car along a road on the way to Montpellier, where he's about to become the titular pain in the rear (particularly the rear belonging to Lino Ventura). There's a gormless look on the face of his character, François Pignon, who has a vaguely Mr. Bean air about him, although Pignon is less of an out-and-out caricature than Rowan Atkinson's creation.

The filmmakers lay things on a little thick for the viewer's benefit, with insert shots of the silly objects that festoon the car and a soundtrack that emphasizes that the man's head is in the clouds. But Brel makes this unnecessary: his expression tells us all we need to know, even before Pignon opens his mouth. He's trouble, and yet entirely oblivious to his effect on everyone around him -- he's unable to understand why, for instance, his wife might have left him (she is sane, we might speculate). 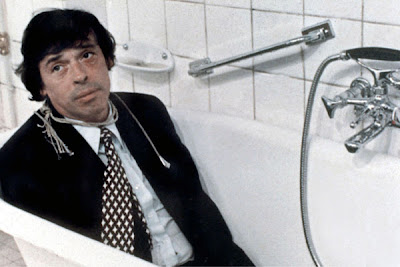 There's nothing especially likeable or admirable about Pignon, who fastens like a limpet on anyone who shows him an ounce of kindness, but the comedy in L'Emmerdeur comes from a different place, that of the ways in which a man like Pignon can create absolute chaos in the well-laid plans of others, in this case a carefully-prepared hitman who only interacts with Pignon in an attempt to ensure that police stay well away from both men, who are assigned to adjoining hotel rooms.

The film marked the end of Jacques Brel's brief, rather unlikely film, unless we count a subsequent appearance as himself, and was one of his biggest hits, surpassed only by Claude Lelouch's L'Aventure c'est l'aventure -- released the previous year, and also starring Lino Ventura. That's a film truly of its post-1968 moment, with a surreal sequence wherein a band of gangsters undergoes an ideological education, but it's ultimately a much less memorable affair, mostly because it lacks the lean rhythm that makes L'Emmerdeur so effective (it has an interminable prologue that last nearly 45 minutes, nothing like the quick set-up here). Brel has far less to do, too -- he's somewhat lost in the large cast, which includes another star of the French musical scene, M. Johnny Hallyday.

Brel acted in just ten films, over an intense six-year span, withdrawing from the screen in his mid-40s after he was diagnosed with lung cancer. His decision might have been prompted by an ultimately fatal illness, but the singer was always one to do things on his own terms: he had already more or less ceased live performance in 1966, weary of the constant road routine, though he did continue to record albums almost until his death. 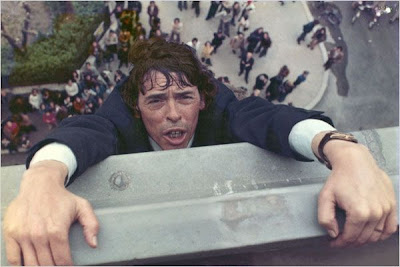 While Brel hardly carved out a screen career to equal his singing work, he made the same intelligent use of his rather unconventional gifts: you'd hardly claim that his voice is the most beautiful you'd ever heard, but it's perfectly married to his material, and similarly Brel makes fine use of his less-than-conventionally-handsome physiognomy. Here he exploits his appearance, particularly those horsey front teeth, in service of his dim-witted character, though elsewhere he convinced as a dramatic lead. That his character's wife leaves him on this occasion for a man who can provide her with a horse of her own is perhaps an unintended amusement, though.

Though L'Emmerdeur is certainly a comedy, the film's setup is unexpectedly grim. Before we've discovered anything about Ventura's character, there's a car bombing gone wrong, which is swiftly followed by an execution. We're in no doubt, then, about Ventura's bona fides: he's something of a Melvillian character, remorseless and taciturn, the overlap surely no accident given that the actor had appeared in two of Melville's films a few years earlier. One of the many oddities in the 2008 remake of the film, directed by Francis Veber, author of the original script here, is the decision to craft an entirely different prologue that undermines any threat posed by the hitman, played by Richard Berry. Like his castmate Patrick Timsit, Berry can't hope to compare with his predecessor -- the comparison isn't even fair. Even more outlandish is the goofy Hindi remake, Bumboo, which totally misses the point that L'Emmerdeur succeeds in good measure because it's played completely straight. (Billy Wilder also remade L'Emmerdeur, as Buddy Buddy -- the director's final film, and perhaps a Late Films entry of the future). 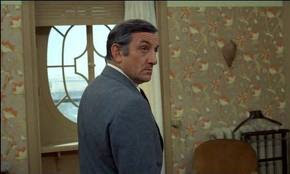 Here though, we really believe that Ventura is a remorseless killer, who has the professional and personal misfortune to cross paths with a bumbling fool unable to accept the disintegration of his marriage, and obsessed by the shirts from which he makes his living. It's not just the actors and the tight script who sell the tale, though: Molinaro chose Raoul Coutard to shoot the picture, and they use a handheld style that gives a real sense of the cramped interiors and the proximity between the two characters. The shooting style, which frequently follows the actors from one space to the other, gives us an excellent sense of the geography, too -- another flaw in Veber's remake, where it's sometimes hard to tell whether an event is taking place in one hotel room or its neighbour.

Our last sight of Brel suggests that Ventura's travails, already numerous, are only just beginning. Veber scripted, and directed, numerous variations on the oddball pairing theme later in his career, but he was rarely blessed with a tandem that worked quite so well together, perhaps because his own skills as a filmmaker are much more limited than his writing talents. You wonder what Brel might have made of roles essayed by Pierre Richard in particular -- Richard is amusing enough in a kind of puppet-ish way, but Brel has an edge that Veber only rarely re-captured in later films, though that certainly didn't hamper his commercial success.

In semi-fairytale style, Brel lived out his final few years in peripatetic fashion, sailing the world on his yacht, with periodic health-related trips back to France, and while he stepped back behind the microphone a few times, he held firm on his retirement as a film actor.

Lovely, thanks -- and I must see this! Had only seen one Brel performance, Carne's Les Assassins de L'Ordre, where he's very credible. Fascinating to think of him in a farce!

I haven't seen that one for years, but I've enjoyed all of the Brel films I've seen; never seen his work as director, though.