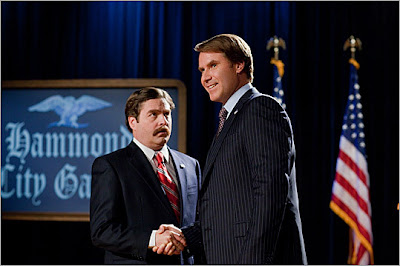 As a post-Thanksgiving diversion, this was amusing fare, the usual over-the-top Will Ferrell antics balanced out considerably by Zach Galifianikis' much calmer approach (though it's hard now not to notice the possible influence of Jack Black's work in Bernie, which was on the festival circuit before The Campaign began shooting: the characters are similar, but the performances even more so). The film never attempts to be anything more than the ne plus absurdum of state political races, except for the treacly concluding sequences, which seem to completely undermine the lower, dirtier, meaner tone of everything that came before -- sitcom redemption once the penis jokes have run out.