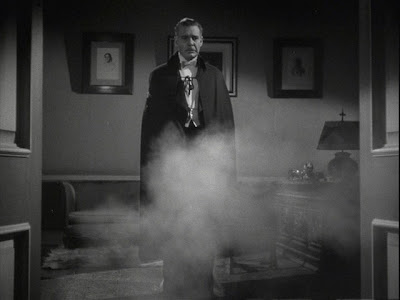 As in Siodmak's later Cobra Woman, the absurdity of the script and much of the dialogue is at times quite successfully counterbalanced by the atmospheric staging: whatever the flaws in the raw material, you can't fault the director for a lack of commitment to the end product, probably why something like Cobra Woman ends up as such an intense fever dream despite its patent silliness. Here, there's no Technicolor craziness, but scenes in a prison, where a man seems to be talking to himself, or in the cabin of a gypsy woman on a Southern plantation (there's a mashup for the ages) are wonderfully creepy, deploying shadows and set design to great effect. The count himself is far less interesting, and indeed until the latter stages Lon Chaney Jr has very little screen time -- though his various entrances and exits are cleverly handled with some fine effects work. By contrast, flying bat technology had not appreciably improved since 1931. Among the supporting players, J. Edward Bromberg is most entertaining as Professor Lazlo, a vampire authority conveniently based in nearby Memphis; Bromberg was a future blacklistee, and an authentic Transylvanian, born in Timisoara.

I'm including this in my Watching Movies in Africa project but it's another cheat -- like And Then There Were None before it, Son of Dracula was banned by the Gold Coast Board of Control in 1946, part of a broader discomfort with horror films. Indeed, the censor was so reluctant to pass anything that had received the British "H"certificate in the 1930s and 1940s that exhibitors rarely imported such fare, and when they did, as in this case, a ban usually resulted. It's not clear whether local audiences were all that interested in horror films, since they had so few opportunities to see them, though later audiences loved films like The Exorcist, one of the first films to have an extended run in a single theatre in what was, by then, Ghana. That was not the local exhibition norm, with nightly changes of programme more common. The censors that banned Son of Dracula did not go into much detail about their rationale, observing simply that it was "A 'horror' film to which the Board took strong objection."