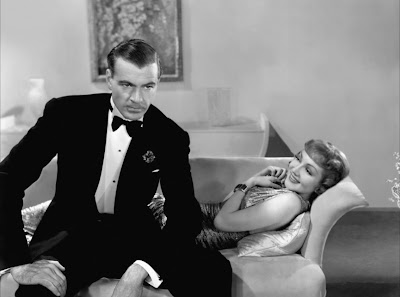 Lubitsch saves the best for first here -- the opening sequence in which Gary Cooper attempts to purchase a pajama jacket without the pants, and encounters Claudette Colbert in the process, is the film's comic highpoint, both in the repartee between Cooper and Colbert and the interactions with the bemused store clerks and their multiple superiors. Written by Charles Brackett and Billy Wilder, the scene is a model of construction both in the individual gags and the overall shape, seamlessly moving from shop floor to the upper echelons and back to the customer desk. Thereafter, though, the comedy is stretched somewhat thinner -- Cooper doesn't seem like a natural for this kind of fast-paced dialogue, and while he extracts the occasional well-deserved laugh, such as in a a scene of pantomimed sleep, other lines fall flat on delivery. In any case, a great deal of the comedy is leached out in the often bitter second half, as Colbert does her utmost to extract a divorce from her much-married husband, though she manages to retain a devilish sparkle even when her character has a rather thankless assignment. Thankfully the support players provide plenty of distraction -- David Niven has an amusing turn as does, perhaps less obviously, Warren Hymer as a prize-fighter with a strong sense of the rights and wrongs of his assignment.