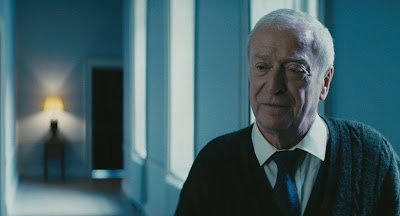 2012, US, directed by Christopher Nolan

Where I found the action sequences in the prior franchise entry pretty confusing, here it was the overall structure of the film that I found mystifying at times -- we kept looking at each other as though to ask, "have you any idea what's going on here?" I'm not sure if that's a reflection of the fact that this is the capstone film of the trilogy, and that we needed a little more recent familiarity with the preceding installments, or whether there are structural problems that create that sense of bewilderment. Even with the film's expansive running time, I had the sense that some sequences had been abruptly chopped to save a few seconds here or there -- or perhaps Nolan assumes, possibly correctly, that most viewers can in fact join the dotted lines themselves. That said, there are numerous individually memorable sequences and images -- the sections set in a hellish prison, Bane's masked appearance (Tom Hardy manages to make his character surprisingly nuanced despite having limited face to work with), the sense of a city in lockdown -- but it's almost a relief near the end when the conflict simplifies to the most basic of races against the clock and there's no longer any need to keep up with the multiple storylines.