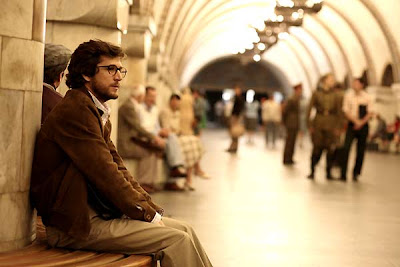 Though it deals with espionage and the end of the Cold War, and takes us into the seats of power in Moscow, Washington and Paris, L'Affaire Farewell is at its strongest when played as a two-hander between Guillaume Canet, as an initially unwitting go-between, and Emir Kusturica as a bearish KGB agent. The two men are a study in contrasts both physically and in terms of the energy each brings to his role -- Canet all nervous tics, worn away by the lies his unasked-for role forces him into, Kusturica almost wilfully calm, eyes hooded, voice hypnotic as he tries to reassure the younger man, an amateur in the world of spycraft. Where their professional lives are contrasted, though, Carion finds overlaps at home, each man's family life in a delicate balance; there are nicely observed scenes where Kusturica dances to a favourite song with his wife in an attempt at reconciliation, or where Canet seeks to calm his wife's frayed nerves, his promises only reinforcing the sense that he has drawn in on himself as he seeks to deal with his own stresses. Those moments convince much more than do the vignettes of the Oval Office, the Kremlin, or the Elysée -- Reagan in particular comes across as something close to a caricature, though Mitterrand gets to don the statesman's mantle.