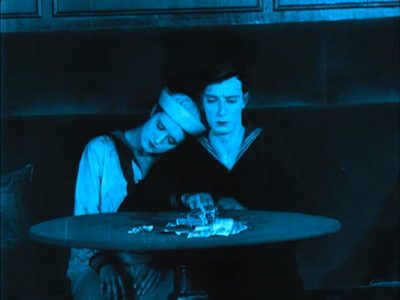 1924, US, directed by Donald Crisp and Buster Keaton

Made the same year as Sherlock Jr., this doesn't soar quite as high for me -- the astonishing inventiveness is there, as are many of the laughs, but perhaps the fact that it's essentially a film built around a prop, however gigantic, robs it of a certain amount of soul. That quality is, for me, at the heart of Keaton's strongest films, and Wes Anderson captured this aspect of Keaton's work rather well in Moonrise Kingdom, alongside several memorable sight gags. 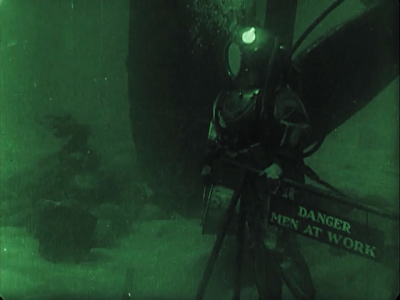 There's something wonderfully ridiculous, though, about the complex setup that Keaton and Crisp engineer to have Keaton and the girl of his dreams aboard an otherwise empty ship -- nefarious agents of obscure foreign nations, shipping magnates, and a foppish family embarrassment all factor into the mix -- but once on board some of the sequences have a brilliance that doesn't always transcend the mechanical, at least from my perspective (the scenes in which Keaton and co-star Kathryn McGuire run up and down the various gangways and passages are amusing but a little over-extended for my taste). By contrast, the sequences in which Buster is convinced that there's another man aboard -- a cutout of director Donald Crisp that floats past his window -- as well as the later scenes on a tropical island, Buster emerging from the sea dressed in a deep sea diver's outfit, restore the sense of absurd invention.