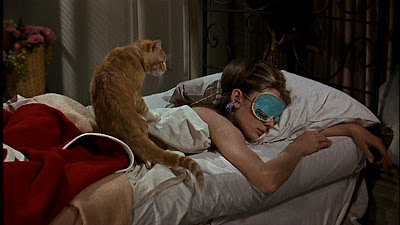 In her appreciation of the career of Blake Edwards, penned just after his death last year, The Siren makes a convincing case for excusing the flaws of Breakfast at Tiffany's based on the wonderful final scene. The film is complicated enough, though, that you could almost as easily make the case that a single scene might cause you to overlook all of the film's virtues. You could choose any of the scenes featuring Mickey Rooney as Mr. Yunioshi, a Japanese caricature of cringeworthy insensitivity, as your Exhibit A.

I found those scenes so troubling that it was somehow easiest simply to block out their existence to focus on the film's strengths. There's the brittle emotional texture, with constant, confident shifts in tone, from comedy to pathos to a kind of urban ennui to romance; the terrific use of screen space, whether in the famous party sequence - an apparently chaotic scene that's actually perfectly controlled, with multiple visual storylines unspooling in parallel - or in a quieter moment like the scene at the bus station where Holly, Doc Golightly, and Paul each seems to occupy just the right spot in relation to the other; the perfectly judged movement in the suspenseful, even Hitchcockian, scene where Holly, observing from outside a window, discovers the truth of Paul's situation; the lush overhead shot of Holly just after she finds out about a death in the family. Enough, just perhaps, to balance out the ill-judged Mr. Yunioshi scenes?

This movie had its moments, but was also sometimes boring. I loved the music, though! Also, even though it is a comedy, the lifestyle and the problems she goes through are really sad if you think about it.