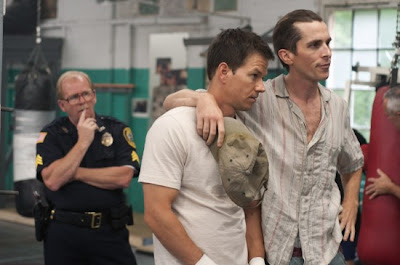 Notwithstanding the fact that he tends to be tough on movies I like, I enjoy David Cairns's forays into newer releases, and his recent take on The Fighter is both amusing and illuminating, particularly his analysis of Micky Ward (Mark Wahlberg) and his girlfriend Charlene Fleming (Amy Ryan), or more accurately the film's version of Micky and Charlene. Still, I wouldn't mind seeing the Rashomon version of the story, given how the film portrays Micky's mother and his truly dreadful coven of sisters, each one more sullen than the last; unlike the real-life Micky Ward and Dicky Eklund, his half brother, the women were notably absent from press coverage of The Fighter, and I wonder to what extent the film slights them. It's a truism of boxing movies that fighters struggle in the lower social depths, but the film implies that Micky's greatest challenge is neither money nor the drugs that consume his brother but rather the predations of his female relatives; they come off much worse than his later, male promoters, usually the source of all that is wicked in the world of boxing.