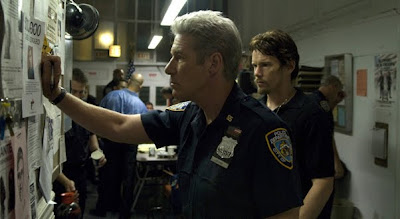 There's barely an original idea in Brooklyn's Finest - Antoine Fuqua even recycles from his own movies, most obviously Training Day - so the movie's principal pleasures come from watching the narrative pieces click into place and from several strong, if occasionally overblown, performances. The script is ultimately too neat, the parallel lines intersecting in rather unlikely style, although the final sequences, in a claustrophobic apartment block, are among the film's strongest: grimy, tense, and unheroic. The three main characters, played by Don Cheadle, Richard Gere and Ethan Hawke - are all generically troubled cops, but Cheadle and Gere in particular manage to make something interesting from the raw materials, injecting a little soul into the conventions, with Gere playing an unusual unlikeable character by his standards.