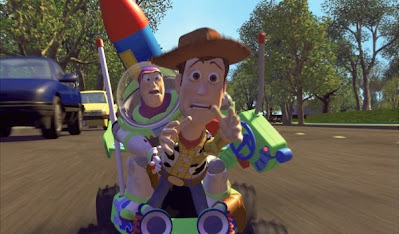 I couldn't help but get the feeling I was supposed to like Toy Story 3 more than was actually the case. Like all of Pixar pictures, the film is exquisitely crafted, with astonishing attention to detail both in the construction of scenes and the physical details we see (the true-to-life scratches on the bottom of a plastic container, for instance), but the emotional core didn't quite grab me as intended.

As Glenn Kenny notes in his review of Rango, Pixar movies often seem to reach for the Meaningful Moment, something that was underlined in director Lee Unkrich's Oscar acceptance speech, and that can come at the expense of the sheer joy of a rollicking story. For instance, late in the film there's a perilous setpiece that's constructed like a finely calibrated emotional rollercoaster, but the resolution of the sequence is so foreordained that I found myself losing interest. There's also an inevitable repetitiveness that comes with sequel territory, as the toys join forces for the third time to solve a major problem. Still, the care lavished on every detail of the screen makes the film consistently worthwhile, and there are several terrifically funny sequences, particularly when Buzz Lightyear accidentally gets re-programmed in Spanish.