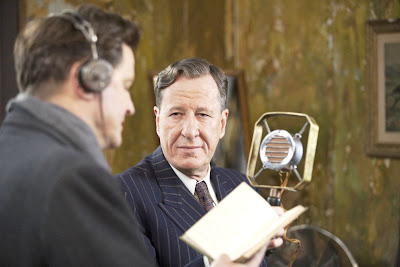 The King's Speech is a rather unexpected royal-imperial fantasy, in which the empire extends across the earth but thankfully doesn't have to be dealt with too much in close-up: the crowds on Empire Day, when the film opens, look reassuring like those at any 1920s football match (in reality, the crowd was probably filled with children given a half-day off school), with the imperial residents themselves safely at the other end of transmitters marked Barbados, Bechuanaland, and so forth. There's something oddly moving and yet absurd about the way that the film still invokes, in 2010, the idea of imperial solidarity despite the fact that even the Australians featured onscreen clearly bore the brunt of much English contempt.

As in The Damned United, Tom Hooper's previous film, The King's Speech is primarily concerned with the actual human being behind a public persona, and while the narrative is brisker and more confident this time around, Hooper's visual choices are less illuminating. He used light and dark, for instance, rather usefully as a window into the mind of football manager Brian Clough, whereas here the sometimes eccentric framing choices, squeezing the king into a corner of the frame at times, don't add much to our sense of George VI as a person beyond perhaps emphasizing that he was ultimately as frail as any other human being.

By contrast, the straightforward close-ups at moments of great tension, the already outsize microphones looming larger in front of the king, are simple and effective, conveying the dreadful fears in George's mind as he attempts to deliver his few words. Colin Firth is quietly terrific in these scenes, his face conveying a sense of the terror that accumulates with each passing second, before he's even uttered a syllable; he does a fine job with the king's line in self-deprecation, too, keeping his voice bone dry. Geoffrey Rush, in careful counter-balance to Firth's controlled performance, overplays most enjoyably, playing up his Aussie impudence; it's hard to imagine that the real Lionel Logue was anything like as disrespectful, even for therapeutic purposes, but the pairing works well on film (by contrast, Timothy Spall, generally a fine actor, is terribly miscast as Churchill, far too patrician a character for the more working-class Spall, while it's a shock - a veritable slap in the face - to see Anthony Andrews so suddenly old, his appearance somehow betraying the memory of his ever-youthful characters in Danger UXB and Brideshead Revisited).