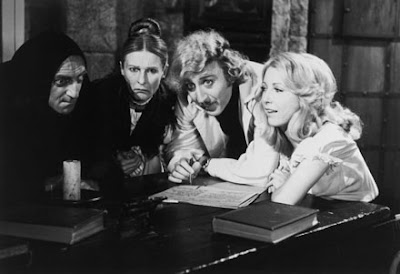 For my money, easily the most successful of Mel Brooks's series of parody/pastiche films, perhaps because his love for the source materials shines through so clearly. Even as he pokes fun, it's clear that he's unspooling scenes he's watched dozens of times with the greatest of pleasure, and the jokes are only improved when his viewers share that affection. Although Brooks doesn't have the same visual interests as James Whale, on whose films he draws most obviously, he still ensures that the black and white looks the part here, so that it's not simply a 1970s imitation but has the richness of the 1930s originals.

The cast, too, is terrific: they look nothing like the kinds of actors who made their names in Universal's classic horror movies - with the possible exception of the blockheaded Peter Boyle - but their timing is masterful: Kenneth Mars is particularly wonderful as an Inspector with an apparently fake arm that misbehaves at the most inopportune moments, though Marty Feldman always steals the movie for me, his rubber face never more perfectly put to use than as Igor, though his way with a throwaway line is equally memorable.

One of the most quotable/singable movies I've ever seen. We watched it in my high school English class after reading Mary Shelley's Frankenstein (my teacher had a sense of humor), and we asked to rewind SEVERAL scenes because we could not stop laughing. It's just as hilarious to watch now.

Interestingly, the striking success you accurately locate in the love of the original material — which lifts this film head and bolt-bearing neck above other Brooks parodies — came from Wilder, whose pet project this was. I wish Brooks would collaborate like this again, with someone talented, funny, and truly expert in a total film genre. Can't you just imagine what he might do with, say, Bind films?

Thanks for the clarification -- I wasn't aware that Wilder was the true source, although I do think Brooks' own talents, including on the visual level, are displayed to their best effect by the collaboration.