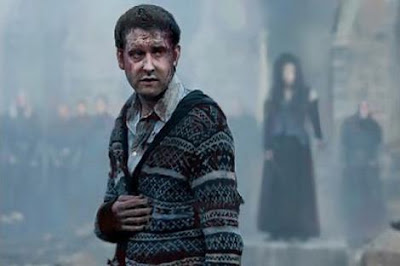 What a relief! The previous film was one of the strongest entries in the series to my mind, carving out some much needed quiet time in the usually frenetic narrative constructed by the novels, but this installment gives us nothing but a two-hour conclusion that's constantly in whirligig motion -- viewed some months after the last episode, it feels tacked-on rather than intimately rooted in everything that came before, hardly surprising given that its back story was played out in another film. The filmmakers are obligated to find a way to give each character an appropriate sendoff, though not always with any great success (Hagrid's finale is especially throwaway), so that you're almost begging for the actual ending by the time it arrives. There is no time for the viewer to become meaningfully invested in any of the events, including the deaths and extreme destruction, because the film is off without pause to the next curve in the narrative. It also seems even more effects-driven than some of its predecessors, losing the anchor in a recognizably real world which was such a source of rich contrast on earlier occasions; perhaps seen in partnership with the immediately preceding film, it wouldn't seem quite so exhausting.