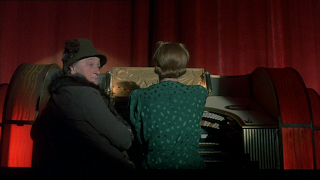 A Private Function, or The Cheerful Dismantling of Cherished 1940s Images of Britain. It is refreshing indeed to find filmmakers willing to so gleefully shred the foundational mythology of post-war Britain  (the film is set in 1947). Although I assume that rationing, then still in force, did indeed make for rather thin gruel in many households, here the venal populace is obsessed by food to the exclusion of almost everything else, with the plot centering on an illicit pig destined for a local celebration in honour of that year's royal wedding. The animal in question is capable of inspiring criminal behaviour and wild passions, though not necessarily in the same people, and the camera lingers lovingly on every morsel to be consumed by the porker. 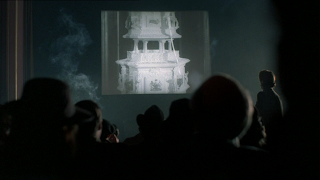 Of course, this being Britain, the film is also an acute examination of the particular discomforts of being forced into excessively close proximity with those of another social class; this is most especially true for the local doctor, played with oily delight by Denholm Elliott, who is forced to consort with lowly farmers, butchers and, worst of all, a chiropodist (Michael Palin) whose wife, Maggie Smith, has a higher social station in mind. The cast is something of a who's who of British acting: trying to keep up with each new face makes it a bit like watching a Harry Potter movie, the filmmakers handing out employment willy-nilly to every Brit with an Equity card. The late, and genuinely lamented, Pete Postlethwaite has one of his first significant film roles here, as the local butcher, playing up his north of England origins for all they're worth. 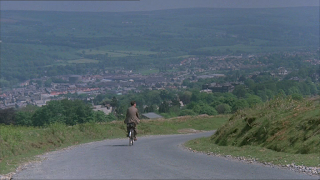