The Woman from Monte Carlo 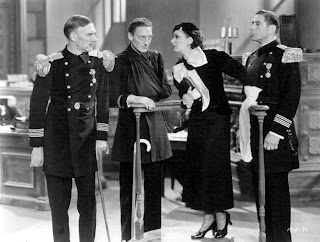 It's nice to see Warren William back in the caddish saddle after his relatively benign turn in Three on a Match, although he's by no means the naughtiest fellow in this shipboard melodrama; that honour goes to John Wray, playing a nasty martinet (is there any other kind?).  Though it's pretty brisk, and there's the occasional shot of interest, especially in the gangways between one part of the ship and another, this is pretty thin gruel for Curtiz, even with some fine players. I hadn't realized that Walter Huston appeared in the film -- though he appeared in just about everything else that was released in 1932 -- but the second he opens his mouth that voice is unmistakable. Lil Dagover was almost as busy that year, but this stands as her one and only Hollywood foray in a very long European career. The script seems to suggest Dagover is a flighty young thing hamstrung by a marriage to a much older man, but since the actress was herself 45 and Huston was only a few years her senior there's a fundamental casting flaw that the film can't overcome with heaped spoonfuls of drama.