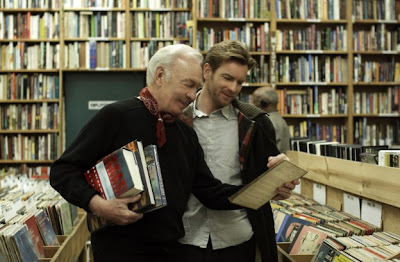 There's a lot of talk about the canine performance in The Artist this year, and while Uggie seems like a thoroughly charming fellow I wonder if he's being singled out for most acting as opposed to best acting, a little like Dustin Hoffman in Rain Man. I was rather taken with Cosmo's admittedly smaller turn in Beginners: he underplays to considerable effect, and it's the kind of work that would be forgotten if they handed out dog Oscars, which they probably should. It doesn't help his cause that he's subtitled.

I'm not sure I quite get some of the objections to Beginners as a depiction of warm-hearted late-in-life coming out (though that's really only a fraction of the film): the movie never pretends to universalize the experience it depicts, nor is it seen through entirely rose-tinted glasses. A man internalizes his sexuality for most of his life and then gets a few good years before cancer takes him? It's not quite a fairy tale affair (pun not intended), and I liked that Mills gave Plummer's character a brittle, temperamental side rather than romanticizing him as either a father figure or gay man.