Three on a Match 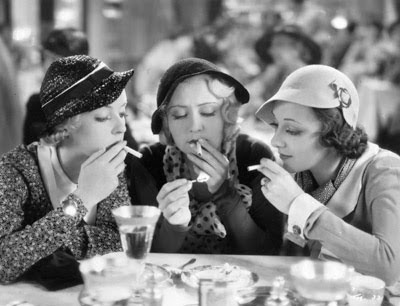 The title's a bit of a deception, but Two on a Match wouldn't have allowed the filmmakers to use a phrase apparently then in vogue; the three women featured above have rather unequal screen time, with Bette Davis's character shoe-horned in as an after-thought to the shenanigans involving Ann Dvorak's drug-addled dissipation and Joan Blondell swooping in to pick up the pieces of Dvorak's life. Which include, not incidentally, a husband, played by Warren William in a role which must have seemed like quite an acting stretch, since on this occasion William doesn't play a complete cad. Even by the standards of the 1930s, the film squeezes an extraordinary amount of plot into an hour, with LeRoy using newspaper headlines as one neat device to mark the passage of the years, and the film takes full advantage of pre-Code leeway, with marital woes, booze, drugs and brutal gangsters (including Bogart in his hoodlum period) front and center. There's also a kidnapping sequence that must have evoked the tragic Lindbergh case, which took place earlier in 1932, for viewers of the time; as a plot device, it's rather questionable seen against the terrible outcome of the actual kidnapping.