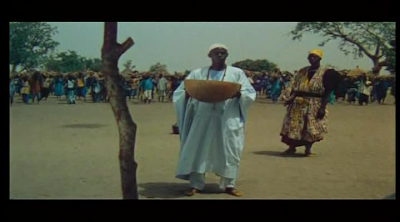 Like Sembène's earlier Emitaï, this film is focused more on the collective than the individual -- while we become familiar with several specific faces, the director's primary interest is in exploring social forces more generally, and particularly the confrontation between Christianity, Islam and traditional African religion (at some unidentified point in, most likely, the late nineteenth century). The film is structured largely around several extended debates, set pieces of intense rhetorical interaction that foreshadow Abderrahmane Sissako's Bamako. 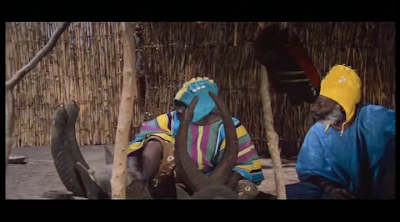 At least on this occasion, Sembène is much stronger on discussion than on physical action, and I wonder whether the decision to allow those sequences to unspool at such length is something of a tacit admission as to where his strengths lie: it can be very hard to tell what is happening, or where the characters are in relation to one another, in the brief action scenes, but he is capable of extracting great tension from sequences in which only words are exchanged. There's an especially powerful moment late on when one leader asserts his authority by appointing a new person to speak publicly for him; while the previous speaker is clearly upset, he is silenced by the need for absolute obeisance, and moves meekly to his assigned place in the background. Sembène also denies some of his characters any speech -- the European merchant and priest never intervene in the debates, though the latter does intone some portions of the religious service in Latin, even if the camera frequently picks them out as they observe the exchanges between the African characters. 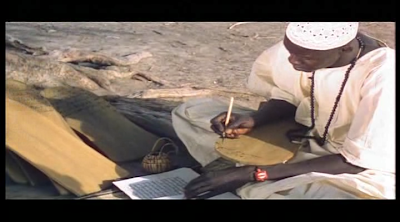 Ceddo is an often angry denunciation of outside influence, in this case religious-political influences, which reminded me of Sembène's tendency to reject outside filmmaking influences as he proposed an authentically African way of making films. It's one of the most problematic aspects of his filmmaking philosophy to me, for it seems to me to forgo the opportunity to insert African cinema in a larger global conversation -- it somehow condemns the continent's cinema to a hermetically sealed space. Whatever the director's views on cinematic influences, he makes clever use of his resources to avoid complex effects, using careful angles to deal with moments of violence without requiring much in the way of fakery, for instance, though there is a very brief and inexplicably sped-up sequence that recalls silent slapstick at a moment when humour surely wasn't intended. 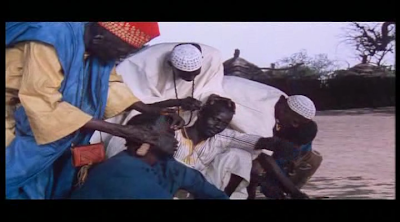