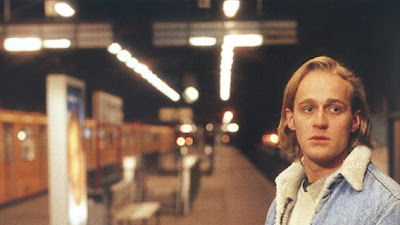 I lived in Berlin for two years, from 1999 to 2001, and no film better captures the feel of the city as I experienced it, as a place where anything could happen, at any time -- there's a magical realist feel to certain scenes in the film that nonetheless seems entirely grounded in the city of the time. The first weekend I was there, some new acquaintances invited me to an art show in a former butcher's shop. For some reason, someone had filled shallow trenches on the floor with flour, and by the end of the evening everyone's clothes were white up to the knees: little clouds trailed behind us as we walked out into the chilly November night, and yet it was all entirely normal.

One major difference between the film and the city as I experienced it, though, and not a minor one: while I could never quite figure out how some of my friends stitched together a living, they still seemed pretty comfortable, whereas the characters here are visibly more hand to mouth, and much of the film centers around the jobs that they take and the schemes they concoct. For all that, though, there's a verve and a chance-taking about their lives, and a warmth in their fumbling efforts to create a new sense of family. That's not an uncommon cinematic theme, but it's handled convincingly here -- in halting, sometimes ham-fisted steps rather than in any simple progression, such that we learn of the characters' frailties along with them, as it were. In the end, though, it's hard to maintain any critical distance from the film -- the people and the streets feel like part of my own life in some odd way, and I'm overcome with a confused sense of nostalgia and heartache as I watch the characters work through their stories.