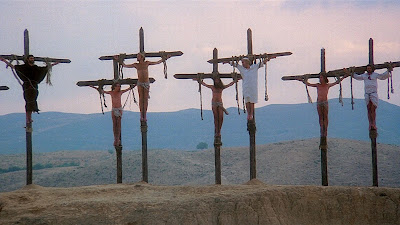 Though it was first released in 1979, this was the backdrop to my teenage years in the late 1980s, since the Irish censor saw fit to ban it, and it wasn't until almost a decade later that we could get our hands on the film with minimal hassle. Having watched and re-watched the movie on poor VHS over the years, it was a little startling to see it on the big screen -- a few of the sequences felt a little flatter, sketches that never quite soared, whereas others, from the unexpected intrusion of a spaceship to the in-truth-rather-gobsmacking final shots of a couple of dozen crucified unfortunates singing their way into the afterlife, really pop in the larger format. Indeed, I had't quite grasped how striking those final images could be on previous viewings, remembering the song but not the visual impact. For the rest, the constant absurdist invention is as endearing, and hilarious, as ever -- just a shame that the audience I saw it with wasn't bigger to really have lift off.