Häxan: Witchcraft Through the Ages 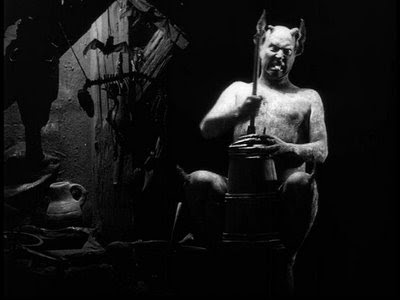 A true oddity, this one. Christensen's film purports to be a quasi-academic discourse on witchcraft from antiquity through the present, with the opening section quoting from a variety of manuscript sources and quickly sketching in the apparent ubiquity of the notion of witchcraft, before settling into some kind of ill-defined European middle ages location and unveiling its true purpose, a series of often lurid vignettes depicting the depraved reality of the phenomenon, complete with lascivious devils, torture chambers, and slavering inquisitioners, the better to point up the church's role in creating and sustaining that which it purported to condemn. Christensen shows himself to be a very nimble director, using all manner of effects, from a sort-of live-action tableau of hell to several extraordinarily atmospheric night-time sequences (the most chilling of all perhaps that where a woman mistakes the activities of two anatomists for something rather more sinister -- the scene has none of the wilder elements that are more amusing than alarming to a contemporary audience, and thus retains all of its power).