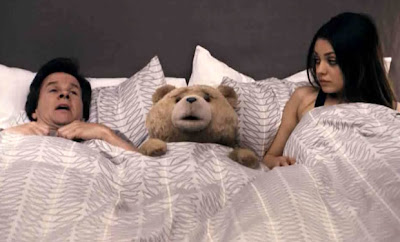 2012, US, directed by Seth MacFarlane

Every now and then, there's a clanger of a line that's just a little too gross to be funny, but for the most part this is consistently funny, if entirely silly. The set-up is sitcom-esque, perhaps inevitable with a director with a background in episodic TV, but the performers are more than game, although Mila Kunis is a touch too long-suffering for my taste, and the film employs an I-can-see-this-coming-a-mile-off deus ex machina to avoid having to play her storyline out as it might work in, you know, the real world. Though admittedly such considerations are hardly on point when you're talking about a film featuring a real-life, profanity-prone teddy bear.