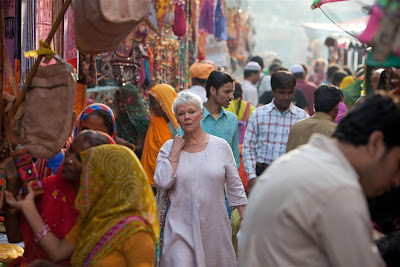 Perhaps it was the presence of Maggie Smith and Penelope Wilton, but The Best Exotic Marigold Hotel reminded me of an extended offsite episode of Downton Abbey, with its multiple storylines frantically piling up at times, though John Madden does allow his scenes to develop for more than a few minutes where the story requires it (those odd inserts of one storyline into the other in the television show, as if the producers have no faith whatsoever in our memories, always prove jarring). Still, Madden leaves himself with a lot to juggle here, and the film wouldn't have suffered greatly if, say, the subplot involving Celia Imrie had been quietly excised, perhaps giving a little more time to prepare the ground for Maggie Smith's late-breaking character arc. The cast, though, are uniformly charming, and Madden leavens the fairly straightforward narratives with occasional unexpected twists -- the heartfelt resolution of Tom Wilkinson's story, or the moment where Ronald Pickup delivers an entirely sincere response instead of the off-colour joke we might expect. The greatest pleasure, of course, is just watching this cast of seasoned thespians at work -- it's a little like a parade of Rolls Royces in procession, a sight to behold.