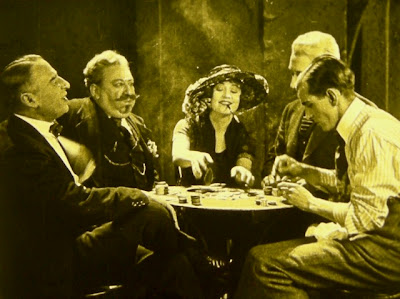 The streaming version of this film was made possible in part by the 2012 For the Love of Film Blogathon, and I'd urge you to watch the film at the National Film Preservation Foundation site, while it lasts -- streaming is an expensive business, and the site is unable to host the film on a permanent basis.

The White Shadow was originally a six-reel picture but only the first three reels survive -- or I suppose to be more accurate only the first three reels have been found thus far. The picture is in many ways a pretty standard melodrama from what we can judge, though based on surviving plot descriptions the potboiler aspects really kick into high gear in those lot reels.

I won't pretend to see too much of the nascent Hitchcock in what's available here -- my knowledge of his silent work is very limited, and there's a considerable gulf between the style of this film and 1930s sound films like The Man Who Knew Too Much (particularly when it comes to framing and camera movement); Hitchcock had learnt much in the intervening years, and the art itself had evolved. There's also another important presence, of course -- the actual credited director Graham Cutts, and while it's not hard to imagine Hitchcock's vision contributing to, say, the striking staging of the scenes in The Cat Who Laughs nightclub in Paris, or the effects that show Betty Compson in a dual role as very different sisters, Cutts was a competent and occasionally imaginative director himself, and shouldn't be entirely dismissed from the picture. Still, it's an intriguing glimpse into the great man's apprenticeship, and wonderful that such historical treasure still crop up from time to time in distant corners of the globe.