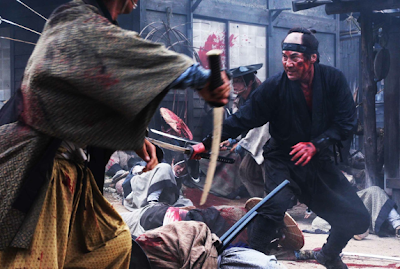 Before I headed off to the screening, my colleague commented, "there are a lot of... assassinations," as indeed you might expect with so many men at work here. At the time it didn't seem like an especially insightful observation but I understood afterwards her loss for suitable words. The entire second half of the film is an extended, extraordinarily energetic action sequence, a virtual barrage of swordplay, blood, and destruction -- the people responsible for making those swishing sword sounds were very, very busy on this project.

I'm not familiar with Takashi Miike's earlier work, except by reputation, but on the strength of this outing I'm kind of glad that he elected to remake The Thirteen Assassins (the original dates from 1963 and I've only been able to find a trailer) rather than The 47 Ronin. The problem with the climactic battle royale is that notwithstanding an hour of measured setup, most of the assassins are barely distinguishable from one another: the crazed, hilarious mountain man who becomes the final addition to the happy few is the most diverting of the good guys, while the villain of the piece is the film's most memorable character. He's a truly evil man, prone to using peasants for target practice, and so twisted that he revels in the film's bloody finale even though the purpose of the attack is to kill him and all who surround him.