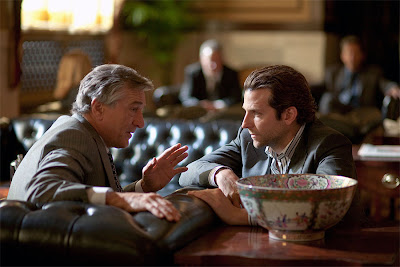 The drug at the centre of Limitless seems ripe for the corporate picking, irrespective of those nasty side-effects: it's a sort of American dream pharmaceutical which allows the consumer to magically work harder, faster. You kind of expect it to transform the economy and consign China to second place with reinvigorated American productivity, when ultimately it just turns unkempt Bradley Cooper back into, well, Bradley Cooper, and conveniently ignores the various side plots. While the central ride is slickly enjoyable -- and it comes up with intriguing new ways to depict the impact of this particular drug on the brain -- the film ultimately poses far more questions than it's either capable of or interested in asking. In that, it's nothing like Burger's most enjoyable film, The Illusionist, which neatly (too neatly?) ties its narrative together. Burger extracts good performances from Cooper, who remains somehow charming despite his character's deep-seated narcissism, and perhaps even more notably from Robert De Niro: there's all manner of scenery-chewing potential in the role of a high-flying financier, but Burger reins De Niro's latter-day instincts in, reminding us that the actor can radiate menace even without a barrage of tics.