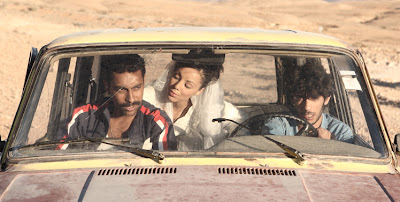 I know next to nothing about Algerian cinema, but I'm on a conference panel next month with someone who presumably knows a whole lot more given that her paper is on the topic. Mascarades was my attempt to not seem completely clueless: I'd never heard of the film before, but it's a terrific discovery: Lyès Salem is mostly known as an actor, and this was his first feature, but you'd never guess it from his complete assurance with camera and narrative. The film opens with an impressive extended shot around the central square of a small town, just before the arrival of a fast-moving wedding cavalcade that sprays dust over the inhabitants before peeling out of town again.

Weddings are at the heart of the film -- fictional weddings, remembered weddings, potential weddings -- and Salem uses the events as a means to explore both tradition and modernity in the Algerian context, though he never sets the two up in simplistic opposition. Salem himself plays the central character, Mounir, a jumped-up fellow who tries desperately to exercise control over his family. The director-actor takes great delight in puncturing his character's arrogance and while his sensibility is very different from Sasha Baron Cohen's it's hard not to be reminded of the latter's Borat in one of the early scenes, with Mounir's moustache front and center in a close-up shot. Salem has an altogether more subtle set of tools at his disposal, though, bringing Mounir's small town to vivid life in a brisk 90 minutes, and retaining an underlying affection for his character. The remainder of the cast appear to have virtually no screen credits, either before or afterwards: I'd be interested in discovering whether they are experienced Algerian actors or non-professionals, since they're an entirely convincing ensemble here.