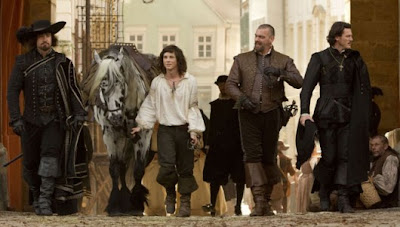 I read Dumas's original novel twenty years ago in college and while the years may not necessarily have been kind to my memory, I had no recollection of the zeppelin-like air war that features in the climax of this version. I imagine that any re-telling of a much-filmed tale has to find something in the way of novelty, but changing the core intrigue so completely and tacking on CGI silliness to compensate for often bland actors, didn't work for me even when trapped on a plane with no other entertainment to hand. It really is a pity because there are very occasional hints of a more interesting film: Anderson makes good use of the sumptuous interior spaces of the palaces where much of the film takes place, and the swordplay sequences are for the most part brisk and clear.