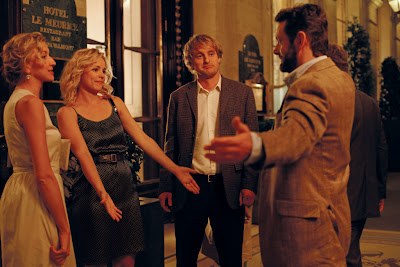 Anyone who cranks out films as regularly as Woody Allen -- the last year he didn't have a film appear was 1981 -- is unlikely to knock it out of the park every time around, and I've found some of his post-2000 films to be rather a slog even if I keep pulling for him to get back on his game. Midnight in Paris takes him back to his stand-up roots, during which he told amusing anecdotes about Scott and Zelda Fitzgerald and Hemingway, and going back to the original well of inspiration seems to have given him an extra spring. The timing is brisk, Owen Wilson is a fine stand-in Woody Allen -- not to mention a less jarring match for Rachel McAdams, Marion Cotillard and Léa Seydoux-- and Paris is a vision.

Woody's version of the city has about as much realism as Owen Wilson's take on the place -- where Wilson projects back to the 1920s and beyond, Woody carefully sanitizes out every gritty corner and virtually every non-white face (Josephine Baker would be as much of a novelty in Woody's Paris 2011 as she is, very briefly, in his film). The anachronism of the film is even more obvious given that Allen's script, for once, actually makes reference to the contemporary world, with cracks about the Tea Party giving the film a very up-to-the-minute flavour on one level.