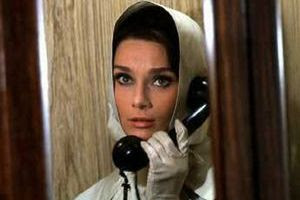 Notwithstanding the startling opening, in which a body is flung from a train, and the presence of James Coburn as a particularly nasty customer, the terrifying question at the heart of Charade is really whether Cary Grant could possibly be a Baddie. Donen takes the germ of an idea bequeathed him by Hitchcock and adds several extra layers of audience-confusing intrigue to keep us in is-he-or-isn't-he suspense until the very last moment, with the entire edifice depending on our sense of Grant's terrific screen charm. Despite the occasional moments of menace, there's an essential playfulness to the entire film, foregrounded in the verbal jousting between Grant and the equally appealing, if rather younger, Audrey Hepburn.

Although set in Paris, the film is blessedly free of the usual tourist fantasia -- shots of the Eiffel Tower out every window -- and indeed many of the most memorable moments are on studio sets. The sequence where Hepburn arrives back to her marital home, early on, to find it stripped bare of every possession is both dramatically powerful and visually striking, with Hepburn becoming increasingly frantic as she runs from room to room. The scenes in Hepburn's hotel are equally clever: Donen makes much play with the ways in which the characters move from one room to another within the establishment (it occasionally reminded me of the precise mapping of space in another Hepburn film, Breakfast at Tiffany's).