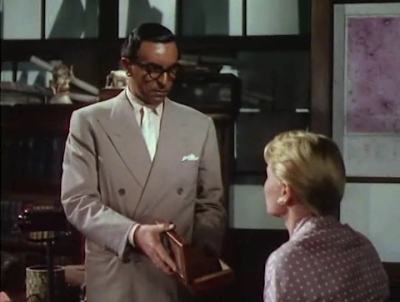 Ealing Studios made a series of pictures filmed in Australia and the African colonies in the 1950s, and for the most part Harry Watt was the go-to director for these overseas jaunts; The Overlanders, with Chips Rafferty, was a pretty enjoyable Aussie cattle drive affair, but this film is rather less successful, at least in dramatic terms. The script is pretty awful -- the actors sound pained at times, delivering the most obvious of lines, and there's not much they can do with the gaping plot holes either -- while the seams in the mixture of location footage and studio material are painfully obvious. 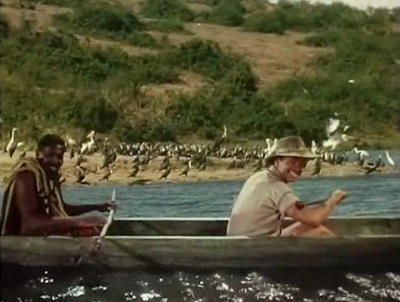 Watt's background was in documentaries, one of the many filmmakers trained with John Grierson, and the location footage is often rather good: the wildlife sequences are arresting, never more so than in the footage of a crocodile trying to munch on some daredevil storks. Unfortunately, the human drama is much more problematic, and often blatantly idiotic. As with all colonial adventures, the white man has to be seen to be in charge, leading to such absurdities as Anthony Steel pointing to a hippo and helpfully observing to his African companion that they need to be alert to danger; said hippo is so ridiculously fake that it makes Bruce the shark, from Jaws, look a model of special effects genius. It's not clear whether the film has any self-awareness of these absurdities; at another moment Steel insists, despite arguments from African sailors, on leading a boat across a reef. Disaster inevitably ensues but no one observes anything along the lines of "I told you so," however justified such a sentiment might be, nor does the fiasco appear to shake Steel's very English confidence for a moment. It's not all bad, of course: Edric Connor gives a very dignified performance as Ushingo, the chief of an African tribe under threat, while there's so much unsubtitled Swahili that the film could well be used with some success in a language class, as long as you knew the Swahili word for "patronising as all hell" for the subsequent discussion. And, I suspect entirely inadvertently, the film provides a rather excoriating view of the contempt in which whites held most of their colonial subjects in a scene with an untrustworthy lawyer, an unpleasant but incisive man. 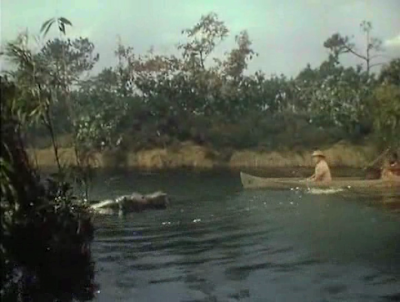 Note: This is another entry in the Watching Movies In Africa project. Despite its limited intrinsic interest, West of Zanzibar managed to cause quite a stir in several colonial locations, including Kenya, where Harry Watt did much of the location shooting. Watt filmed parts of his earlier adventure Where No Vultures Fly in Kenya, apparently without incident. For the sequel, the Kenyan administration debated for some time whether or not to grant him a filming permit, eventually giving Watt permission to tour the territory in 1952 with his crew. When the film was scheduled for release two years later there was chaos, however. The Governor was to attend a gala premiere of the film in Nairobi but the censors were dealing with objections from the country's Arab community. In the end the premiere was cancelled and the film banned, although it was eventually shown -- after more debate -- on Zanzibar. While the film was banned in at least some other "settler colonies," like Southern Rhodesia (Zimbabwe), it was shown with some fanfare in Nigeria because of the presence of the Nigerian-born actor Orlando Martins in one of the major African roles.

Many thanks to DC for tracking down and passing along a copy of the film.