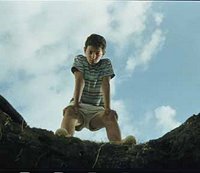 I can't help thinking that many of the reviewers of this film felt that they should like it and therefore gave it more raves than it really deserved. After all, it's impeccably crafted, from the almost impossibly gorgeous imagery of a southern Italian summer to the strong acting, from both adults and children. It's got a sterling premise - a ten-year-old boy finds a boy of a similar age imprisoned in a hole near his home - and there's much to think about in the depiction of a certain element of Italian society in the 1970's (while the treatment of the imprisoned boy is not soft-pedalled, the script smartly avoids easy condemnations of his captors). With all that in mind, the film should grip from first frame to last, but in truth things are so wilfully stop-start that the script constantly punctures whatever tension it creates - and there's no shortage in the first 45 minutes. The director never quite makes up his mind between genre thriller, coming-of-age tale, and leisurely depiction of Italian village life, and that, more than anything, kills the pacing, as Salvatores attempts to fulfil the requirements of each option. It's a shame: with better pacing this might have been a minor classic.

A deceptively simple account of three half-caste Aboriginal girls who run away from an institution of 'training' after they are forcibly removed from their mothers in the early 1930s, Rabbit-Proof Fence is a powerful indictment of white Australian policies of assimilation and 're-education'. The young girls escape from the very low-security Moore River home, and embark on a trek of more than 1,200 miles north to their home territory of Jigalong, navigating their way by following one of the rabbit-proof fences that were erected to protect farmland - and which were later rendered moot by the introduction of myxomatosis. In sharp contrast to the mythology of colonial Australia, the bush here is rarely threatening, despite the difficulties of sustenance occasionally encountered. Phillip Noyce's very mobile camera gives the tale a real urgency at times - the attempted escape from the policeman who captures the girls, and the narration of the girls' flight from Moore River are especially gripping. The conclusion, using a Schindler's List device, though with more power here, is exceptionally moving, a fitting indictment of misguided policies without a trace of hectoring.

Another 80's opus from Herbert Ross - this much more successful than Footloose, mining territory not a million miles from the 80's Kleenex epic Terms of Endearment. As a portrait of Southern charm, it probably bears only a vague resemblance to the truth, but as a showcase for a fine collection of actresses, too many of whom appear only rarely on screen these days, it's a lovably shaggy dog affair. It's the story of the loves and losses of a group of strong, but disparate, Dixie women, whose mutual support network carries them through their various familial trials, with pithy one-liners usually directed at the men in their lives. There are long scenes in the beauty parlor and well-honed speeches that betray the film's stage origins, but that's rarely a handicap: the action moves along smartly, and you're too busy watching the different actresses at work to notice the occasional mechanical creaks. Julia Roberts was on the verge of superstardom here, and she's already adept at eating up the screen. She's in the company of some real scene-stealers in the form of Dolly Parton and Shirley MacLaine, while Sally Field has a fabulous scene late in the film that's a classic weepie moment - a compliment, not a barb. Best seen with a mint julep or a bowl of ice-cream, or perhaps both.

It's hard to believe that the director of The Sound of Music (and Star Trek: The Motion Picture) started out making movies as spare and pitiless as this one (although there is a core of realism in The Sound of Music if you care to look past the whimsy). Robert Ryan does a phenomenal job as the never-made-it-big boxer convinced he can win one fight against a kid who's being set up for a title bout. His manager, however, has made a deal on the side with a local hood, assuming that his washed-up charge will go down without any financial incentive. The action is mostly in the ring: almost half the movie is a literal blow-by-blow account of the fight, with occasional asides as Ryan's wife wanders the streets, miserable at the life she's found herself leading. The dressing-room dialogue and interactions are especially treasurable, with some fine character turns; the other boxers include an unusually rounded black character by the cinematic standards of the time. The movie's a salutary lesson for those who labor under the impression that Raging Bull was somehow sui generis; Scorsese has no difficulties in acknowledging his debt to this standout genre flick, as well he should...
No comments:

Twenty years on, it's a little hard to see why Footloose caused quite the fuss it did - which says as much about the evolution of 'youth' films since 1984 as it does about my memories of the movie from a viewing on video circa 1986. There's no denying the casting magic: Kevin Bacon was poised for a breakout role after several smaller parts in high-profile movies, while Chris Penn and Lori Singer also catch the eye (you wonder why Penn, in particular, didn't go on to headline much better things, but his ballooning weight can't have helped). The story, though, is something of a mess: there are several great individual scenes, whether drama (such as in the meeting of minds between Kevin Bacon's character and the tightly-zipped local minister portrayed by John Lithgow), or dance action, but the film seems to lurch from one scene to the next with no great coherence. I don't demand high realism from popcorn features, but the plotting here seems especially loose; any time things lag, they just pop Kenny Loggins' Footloose on again. That said, it's amazing to note how slow, in a good sense, some of the movie is in comparison to more recent youth hits: Hollywood in 1984 still assumed that a teen audience could deal with scenes of more than 60 seconds, where not that much happened beyond dialogue, and it's something that's sorely missed in the more slam-bang 90's and 00's.
No comments: