Gandhi is a respectful but unadventurous bit of historical filmmaking, which nonetheless created quite a stir when it was first released. Today it's perhaps most enjoyable for its outstanding central performance, a star-making turn by Ben Kingsley. It's still hard to credit how inexperienced he was when Gandhi went into production (while the film may be lacking as historical commentary, there's no faulting the scale of the enterprise). The real flaw here is how schematic the life of Gandhi becomes in the hands of a stolid director like Richard Attenborough. We lurch from incident to incident with little of the imaginative input a more creative director might have employed. There's an unavoidable element of repetition, too, since the political activism of Gandhi's South African years is reiterated, in more resonant fashion, after his return to India. That said, the film does become more involving as the minutes tick by, mostly by virtue of India's fascinating and tumultuous history. The highly credible transformation of Kingsley from vigorous young lawyer to frail elder statesman helps hugely, while fans of British or Indian actors will have a field day name-checking the supporting cast.

A high school classic, Fast Times at Ridgemont High has no plot to speak of: it's just a collection of vignettes capturing life in a Southern California high school in the early 1980's, before the ubiquity of computers, cell phones, MTV and, on the darker side, the spectre of AIDS. Fast Times reveals that teenagers Like Cars! Have Sex! and Do Drugs! It seems a little quaint after years of media obsession with school violence and hard drug use in the intervening period, but what ensures that the film continues to work is the performances - including that of the casting director, who unearthed an extraordinary variety of young actors on the verge of success: Sean Penn, Jennifer Jason Leigh, Judge Reinhold, Phoebe Cates, Eric Stoltz, Forest Whitaker and, in the blink-and-you'll-miss-'em department, Anthony Edwards and Nicolas Cage (under the name Nicolas Coppola). Most of the talent does a good job with the various high school types, but the undoubted standout is Sean Penn as stoner Spicoli. He's hilarious and endearing - so good that you wonder at the almost complete lack of comic fare in his subsequent resume.

Like any romantic comedy, Just Like Heaven lives or dies on the appeal of its lead actors, and fortunately Reese Witherspoon and Mark Ruffalo have charm to spare. Witherspoon plays Dr Elizabeth Lawrence, a dedicated pro with no time for a private life who is involved in a terrible accident. Months later, dreamy but depressed Mark Ruffalo moves in to her apartment, only to find that the place is haunted by the spirit of the previous resident. As he showed in 13 Going On 30, Ruffalo is extremely adept at the kind of comic tomfoolery required in a situation like this. He's especially amusing when the spirit of the good doctor enters his body to try and reassert some control. Of course, notwithstanding the boundaries between the real and spirit worlds, sparks fly in all senses, although the film steers clear of anything morbid. While Witherspoon and Ruffalo alone are great value, there are also some enjoyable supporting turns, especially from Jon Napoleon Dynamite Heder, who's very amusing as an occult bookstore employee. 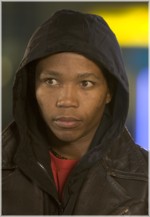 Tsotsi travels some well-worn ground in presenting the tale of a hoodlum who is given a chance at redemption, but the setting and the performances elevate the film well above the average. 'Tsotsi' means 'gangster' in South African street slang, and the title character, played by newcomer Presley Chweneyagae, comes across as an especially nasty piece of work. Living in Soweto, his life is a fitful mess of drinking and criminality, including murder. Tsotsi's shot at changing his life comes when he carjacks a woman who is trying to get into her high-security home. He escapes with the car, and, as he discovers moments later, a small baby on the back seat. He takes the child in, making ham-fisted attempts to care for the baby before he enlists - at gunpoint - a local mother to assist him. While the story has all the hallmarks of sentiment, the film makes no attempt to gloss over the unpleasant realities of life in Soweto and the final scene, as a consequence, has a tremendous power, in which the relative nature of redemption becomes absolutely clear. Chweneyagae delivers a performance of great conviction, as do most of the Soweto crew, conveying the continued hopelessness of the vast black underclass in the new South Africa (the novel on which the film is based, incidentally, was set in apartheid-era South Africa, and Tsotsi escaped with a white woman's child; here the baby is a product of the black upper-middle class, and the only white face in the film is a sympathetic, Zulu-speaking cop).
No comments:

The title of this film is unusually apt: every encounter in seems to have a self-conscious rawness and a violence that mirrors the jarring effects of the various auto incidents that punctuate the action. Writer-director Haggis uses his large cast to explore race relations in contemporary Los Angeles, and the results aren't pretty. At its heart, the film argues that there's a little of the racist in all of us - black, white, Chinese, Iranian, Hispanic - and tries to upset expectations with interweaving storylines that bring the different races together in varying combinations. The stories are uneven and sometimes less than convincing, with Haggis's wordy script coming across as rather stilted, while the overall impression is of something very contrived. It's hard, too, to know whether, in voicing some thoughts usually kept well-concealed, the film really says a whole lot that's new about the problem of race in the US; Haggis certainly seems to think so, but that's not quite the same thing. The film's real resource is its exceptional cast, ranging from the ever-reliable Don Cheadle to Ludacris to Matt Dillon (excellent), Terrence Howard and Sandra Bullock, playing an especially obnoxious Angelena.
No comments:

Charlie and the Chocolate Factory 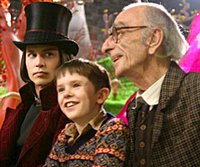 It's hardly original to note that Tim Burton seems more at ease with set design than human emotions, but it's no less true in this film. What's especially striking here is the fact that he doesn't seem incapable of telling an interesting human story. The early scenes, depicting life in the Bucket household before Charlie (played by the precocious Freddie Highmore) finds the Golden Ticket which guarantees him a day in Willy Wonka's factory, are surprisingly warm and tender. Charlie is the least remarkable of the five children who win the chance to visit the factory, but because the others are remarkable entirely in a negative sense the outcome of the tale is hardly in doubt. Roald Dahl's narrative creates great potential for wild and extravagant visuals, and Burton indulges himself as much as any Wonka-bar lover. At times the visuals are genuinely bewitching - especially in the musical sequences - but sometimes they seem like poor copies of the imaginative backdrops for the 1971 film version. As Willy Wonka himself, Johnny Depp is plain weird, even in the context of a surreal fairy tale. By contrast, Freddie Highmore does a creditable job, and it's fun to see veteran Irish actor David Kelly getting some decent screen time as Charlie's grandad.
No comments: