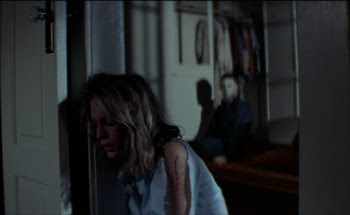 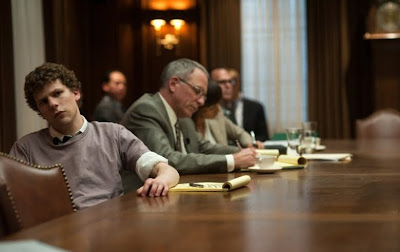 As with David Fincher's earlier film Zodiac, The Social Network examines, among other ideas, the nature of truth - how we assemble a set of details, facts, and assertions into a coherent picture, without knowing whether the final product reveals "the truth" about a particular set of events or an individual. Just as Zodiac leaves us without the resolution we have come to expect from a police procedural, The Social Network provides us not with the reality of Mark Zuckerberg's life but a set of ideas that we must interpret - perhaps to come up with a view of Zuckerberg, but mostly as a prompt to reflection on more abstract issues of loyalty, truth as a legal issue, or the construction of relationships, face-to-face or virtual.

In the opening stretch, Fincher and his production team pay considerable attention to the details of Harvard life, digitally recreating backdrops that were off-limits for the crew, and doing a credible job of imitating Cambridge for the cameras. That's not to suggest, though, that they are interested in a documentary version of events: I think that they are, instead, simply suggesting that context matters, that certain kinds of stories emerge from specific places and times, and that Zuckerberg's story belongs to the Harvard, and later the Silicon Valley, of a certain period. In that sense, whether the film functions as a reasonable approximation of the actual Harvard experience is irrelevant: Fincher is more interested in the wider social meaning of Harvard and its sub-communities, that is, in their place in the American imagination, than in creating an authentic, document of the Harvard educational experience. He has virtually no interest, for interest, in Harvard as a classroom, correctly seeing that this is the least of Harvard's impacts on Zuckerberg and his social circle. Fincher doesn't, in any case, posit a monolithic version of Harvard - the Winkelvoss brothers espouse one version of the institution, one attractive to at least some outsiders like Eduardo, whereas others find more useful parallel networks at the school. That is ultimately Zuckerberg's most creative intuition - that most people are not that interested in the rather limited, exclusive network that the Winkelvosses want to create, and far more intrigued by the idea of a network with extraordinarily wide-ranging tentacles. 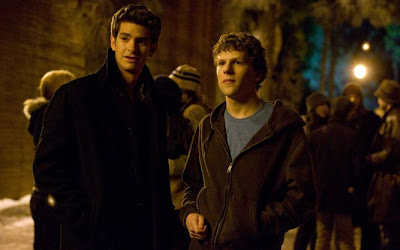 Fincher and Sorkin have very little interest in the actual mechanics of the day-to-day Facebook user experience - it's really not "The Facebook Movie," although they do capture rather well the initial buzz, which I became aware of through working at Boston University, which certainly reinforced my enjoyment of Rooney Mara's putdown in the opening scene - but their presentation of Zuckerberg's personality ties very well to some of the company's well-publicized travails with privacy issues, in which Zuckerberg (the actual Zuckerberg as opposed to the Jesse Eisenberg simulacrum) appears to be unable to understand the concerns expressed by users, as though he's smart but incapable of, or perhaps simply uninterested in, looking at Facebook as experienced by others.

The film covers a lot of ground in just two hours, which Fincher hastens along by abbreviating the transitions between scenes, constantly moving back and forth between legal depositions - multiple depositions - and the events that inspired them, with sentences chopped off in mid-stream only to be resumed in another time and place. There's something almost old-fashioned in Fincher's confidence in dialogue, with his characters defining themselves as much in the ways that they present themselves as by their achievements. Fincher doesn't rush his scenes, allowing the conversations to unfold with some of the same indulgence (and sureness of touch) as Howard Hawks, whose ghost is perhaps most obviously present in the wonderfully pithy opening scene.

The Girl Who Kicked the Hornet's Nest 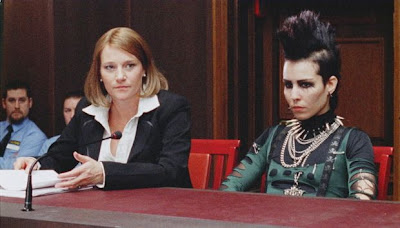 The conclusion of Stieg Larsson's trilogy is rather repetitive, lacking either the punch of the first installment and the (relative) subtlety of the second, and re-working much old ground to bring the story arc to a resolution. We're treated, for instance, to a third version of the violent rape seen in both previous installments, and while there's an element of poetic justice in the conclusion - one courtroom sequence has an extremely amusing twist - there's a sense that we're watching an extension of the second film rather than a story that holds up independently, with numerous artificial barriers before the final resolution. There is, nonetheless, still much to be enjoyed in Noomi Rapace's continued investment in the character of Lisbeth Salander, a resourceful and uncompromising heroine who doesn't conform to the standard character development of Hollywood cinema, but instead remains very much the same troubled, introspective, compelling woman we met in the first installment.
No comments: 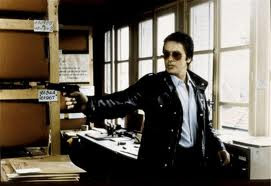 Plotting issues aside, Deray's filming style is straightforward and direct, quickly moving the action forward after a brief prologue, and the film is very much in line with the pungent machismo of his previous collaborations with Delon, right down to the bluntly downbeat ending. Delon's girlfriend provides a revealing moment when she objects to being treated like a dispensable fool, though Delon - and Deray - are ultimately oblivious to her protests; you suspect that Manchette, though no stranger to machismo himself, might have made rather more of that idea.
No comments: 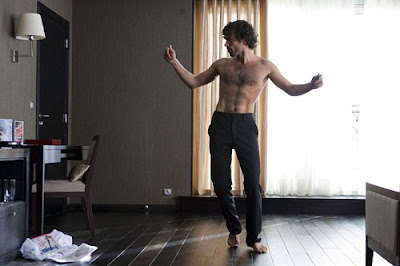 In truth it's probably both those things: the dogs in the street could guess how things are going to turn out, but the story is played with sufficient verve, by generally charming performers, that for 90 minutes or so it (mostly) hangs together. Central to that is Romain Duris, one of the most engaging of current French actors, who invests himself fully in a surprisingly physical performance where he's called on to don a bizarre array of disguises and to master the most unlikely of skills at short notice (the photo above shows him honing his Dirty Dancing skills - one of the film's most amusing sequences, if also one which reinforces the American influence). The early sequence which outlines Duris's profession is also very strong, cleverly edited, with a punchy rhythm that the film can't quite sustain over the remainder of the running time.
No comments: 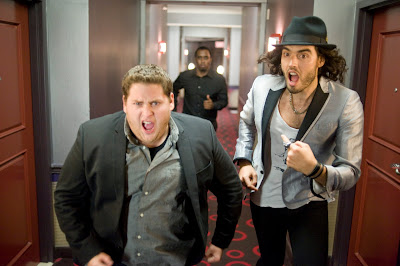 Russell Brand again cannily exploits the overlap between his real-life reputation and Aldous's persona, adding layers to his original creation; Aldous might be self-obsessed and obnoxious but he's also authentic and truthful, and Brand manages to capture his contradictions and compulsions without losing our sympathy. He's also a very fine comic, and it'll be interesting to see what he can do with material that relies less obviously on his own backstory.
No comments: