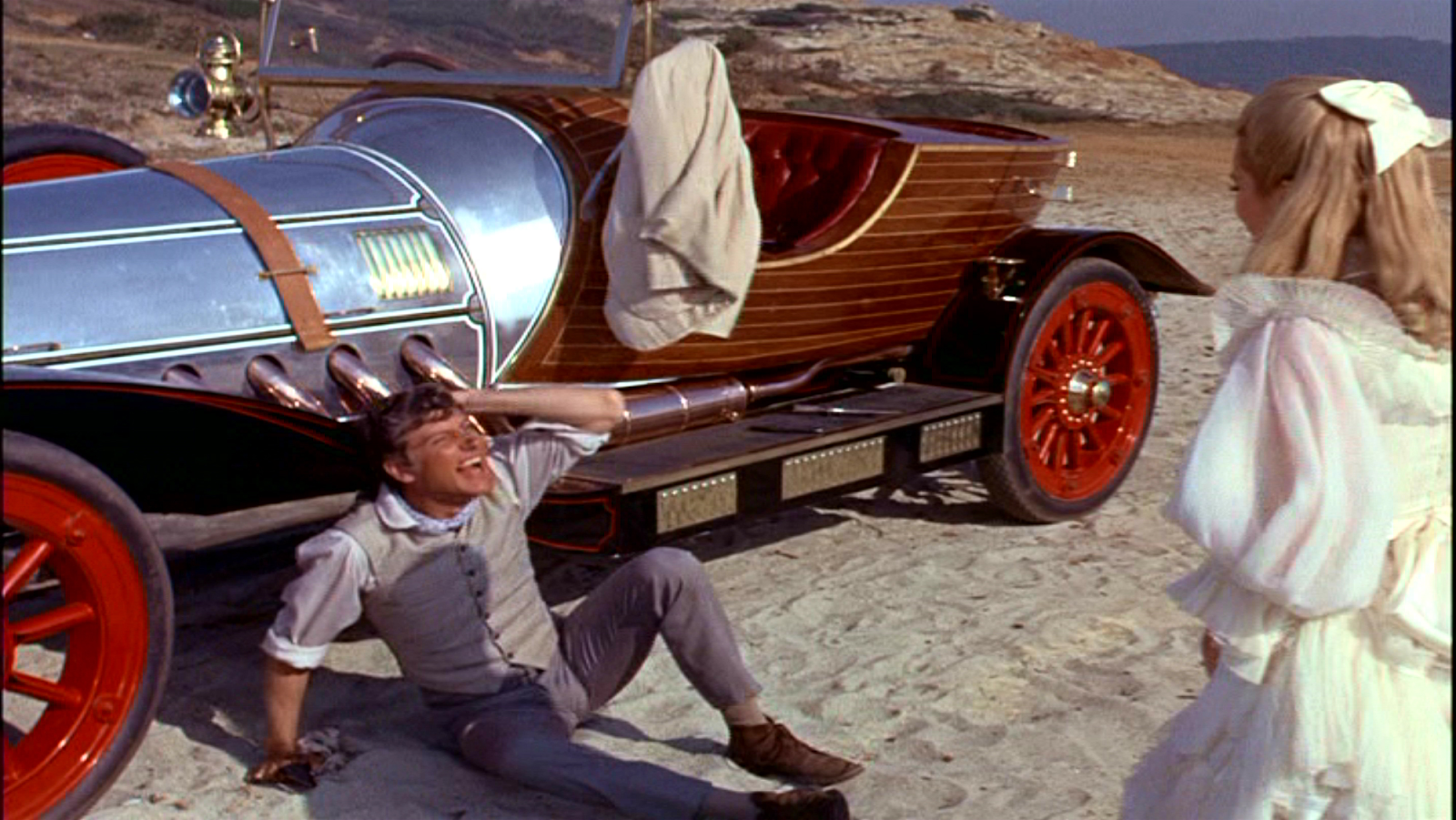 We watched this over the holidays as an evening distraction -- after amusing the boys during long days of inclement weather, chunks of Chitty Chitty Bang Bang generally proved a good distraction for Shay at least, but I can't imagine watching this in a single sitting with young children. Not only would it be hard to explain how parts of the film tie together -- even I was unclear on the need for the presumably very expensive credits sequence -- but it is long, and while some of the musical scenes work rather well, particularly in the sweet factory, others fall very flat indeed. The Bond fan in me couldn't help slaver over Ken Adam's sets, too -- who cares about Neuschwanstein when you can create your own vast soundstage worlds? 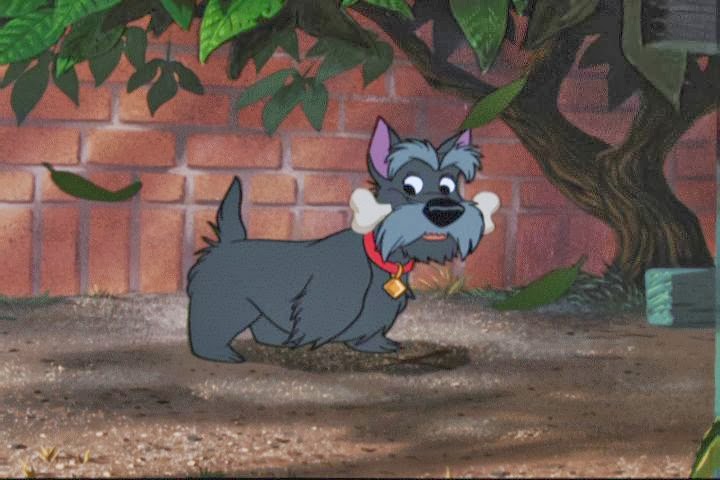 On occasion, I'm able to direct Shay's attention away from the Nickelodeon DVDs toward the Disney movies, so I can get in a dose of nostalgia at the same time as we bond. Things went well for the first hour, with Shay thoroughly enjoying and generally understanding the storyline, as well as giggling at the supporting cast and singing along with the Siamese cats. Of course, he may have been unusually well primed to appreciate a storyline in which a treasured member of the household has to deal with a new arrival, given that his brother was born earlier the same week. You never quite know what will worry children, though, and he was very troubled by Tramp's incarceration. At his request, we stopped the film, discussed what was happening, and reassured him that all would be well. However, things got a lot more dramatic before they improved but he must have grasped the final outcome clearly enough since he requested the film again a week or two later.
No comments:

Chosen purely because it was on the hospital television when we needed a distraction, the title was inadvertently appropriate: my wife was making slow progress through her second very long labour (a mere eighteen hours on the official clock, though we thought the hospital was ungenerous in that regard). The high-water mark for John Woo's American career, the camera operators got quite the workout here, what with Woo's penchant for filming destruction from multiple angles and at multiple speeds. Even at the time, the conjunction between aspects of Woo's Hong Kong aesthetic and the slickness of a Hollywood superproduction was incongruous, though one of the successes of the MI franchise is certainly the sense that each film has a distinct visual identity -- unlike, say, the Bond films, at least until the most recent phase of that franchise.
No comments:

I know the film is silly, I know it violates all kinds of rules of cinematic good taste that I should adhere to, but I also know that it happened to be the perfect film while sitting beside my wife as she was in the early hours of labour. I'm still conflicted as to what the film says about love and obligation -- the Laura Linney storyline is by far the worst in that regard, somehow suggesting that because one has significant familial obligations one cannot also have romantic love -- but it still has treasurable moments, none more so than the instant when Emma Thompson, silently grieving the collapse of her world, reaches down and straightens out a crease in a bedspread. I've no idea whether she or Richard Curtis suggested the gesture, but the it adds a terrific sense of the show-must-go-on reality of domestic life, whether the show continues to feature the same players or not.
No comments:

Not everyone gets to go out on a high: Georges Lautner might be better suited to an Early Movies blogathon, with his most beloved work mostly at the beginning of his career. It's no great surprise that, a few stray bits of TV work aside, he took his leave from directing after L'Inconnu dans la maison flopped, notwithstanding the presence of Jean-Paul Belmondo: box office success aside, it's too middle of the road for a man who aspired to be an unpretentious creator of popular entertainment, and largely succeeded in that vein.

Belmondo wasn't, in any case, the draw he had once been -- not least when director and actor teamed up for several major hits in the early 1980s -- and had already embarked on his own rather extended wind-down in cinematic activity. He hadn't made a film for several years when this opportunity came along, and a good deal of his subsequent work has been overly self-referential, appearing as versions of himself or in gimmicky parts, like an appearance in the 2001 TV movie L'Ainé des Ferchaux where he took on the role that Charles Vanel played opposite a much younger Belmondo in 1963. 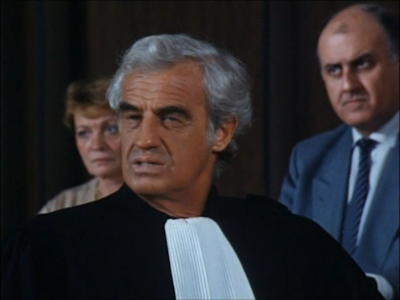 Truth be told, it's an odd project for both men. Lautner's best work is almost always semi-comic in tone, with a good deal more zip than we see here, whereas the humour here is both rare and pretty juvenile, of the stumbling drunk variety. The tongue-in-cheek aspect of Lautner's earlier police and spy parodies is key to their appeal, with the director keen to emphasize he's in it for the laughs, and always giving full rein to the sometimes terrific dialogue he had at his disposal (particularly during his extended collaboration with Michel Audiard). Though Belmondo, who gets virtually all of the half-decent dialogue here, delivers several of his speeches with real relish, particularly an extended meditation on drinking his way through an amply stocked wine cellar, the riper lines clash with the otherwise fairly straightforward procedural tone: they are very obviously lines against an often drab backdrop.

There's a similar incongruity to the idea of casting Belmondo in the first place.  He's supposed to be playing an aging, drunken ex-lawyer, mired in sorrow and drink since the suicide of his wife ten years earlier. It's not all that hard to credit the actor with a love of the bottle, since his face, which once looked like something out of a Cubist painting, is softening and bulging out here and there, but this son of a sculptor, probably born in the kind of milieu the film depicts, rarely convinces in lawyer's robes.

After all, from almost his first screen appearance in the late 1950s, we've learned to think of Belmondo as a man of action rather than one of fancy words -- rip-roaring Bebel, not some schlub stuck on a couch with his nose halfway down a bottle of Beaujolais. Lautner seems to sense this, too, for the character is ultimately re-written into the kind of go-get-'em role that Belmondo more usually played: the lawyer turns detective to solve the film's central mystery (onscreen, that is: offscreen, the big mystery is whether there's any concept of conflict of interest in the French justice system since the case involves the lawyer's own daughter and nephew, among others). While a minor player comments that the role of detective doesn't suit the lawyer, I'd voice a hearty objection -- Belmondo seems to be on much firmer ground here, and I wouldn't have found it at all surprising if his employed his fists, Inspecteur Lavardin-style, in the course of his investigation. 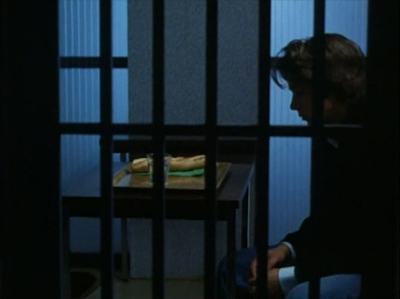 The whole thing is a reworking of a Simenon novel first filmed by Henri Decoin from a Clouzot script in 1942. I haven't seen the earlier film, which stars Raimu, in its entirety but those sequences I have found suggest a much more rancid tone, with Clouzot homing in on the story's possibilities to create another acid portrait of wartime small-town life (edit: I subsequently caught up with the original). Lautner's version reworks the focus so that the dissolute lawyer mostly obscures any portrait of local mores -- even the title, dropping an "s" from the original Les Inconnus dans la maison, makes the mystery within the house of considerably less psychological interest. While Lautner does pay lip service to current trends, with French gangster rap and drug culture making their appearances, the Clouzot-ish small town portrait is not his major interest as a filmmaker in any case: Chabrol might have been a better bet to take a contemporary look at the same material.
No comments: