Tom Tykwer's best-known - and best - film, Lola rennt, centers on notions of coincidence and happenstance, and Winterschläfer, along with some of his later films, makes clear that this is an ongoing preoccupation. As the film begins, in a small town in the mountains, the otherwise level-headed Rene spots a fancy car with the keys in the ignition, and decides to take the vehicle for a drive. While out on the road, he's involved in an accident - which he doesn't cause - with a farmer, pulling a horse-trailer behind his car. Rene's car veers off the road, and is embedded in the heavy snow. Shaken, he walks away apparently unharmed, save for the fact that he has no memory of the incident; the car, to all intents and purposes, disappears. The farmer discovers that his daughter has concealed herself in the horse-box. She has been severely injured in the crash, and lapses into a coma. Half-mad with grief and anger, the farmer is convinced that the other driver is to blame. Meanwhile, Rene, aware that he can't remember something, but unsure quite what he may have missed, has begun a tentative love affair with a nurse, Laura, who watches over the injured girl. Laura's roommate, Rebecca, has problems in her own love-life, constantly at odds with her combustible boyfriend Marco - whose car has mysteriously disappeared.

This complex set-up is sketched in, expertly, in the opening twenty minutes or so of the film: the film does a rather better job of making it all seem plausible (the small-town setting helps). While it's a quieter, more contemplative film than the adrenaline-charged Lola rennt, it's no less involving: once you buy into the film, there's a real interest in the outcome of the characters' lives, while there's a genuine, unpatronising warmth in Tykwer's portrayal of small-town social life. While the conclusion is perhaps a touch contrived, it's hard to imagine an outcome that better, or more satisfyingly, exemplifies the notion of poetic justice. Tykwer is a jack-of-all-trades, co-authoring the script, and also putting an oar in with the music which, as in Lola rennt, cleverly plays with the viewer, heightening the mysterious interconnections between the characters, and creating tension at the most unexpected moments. 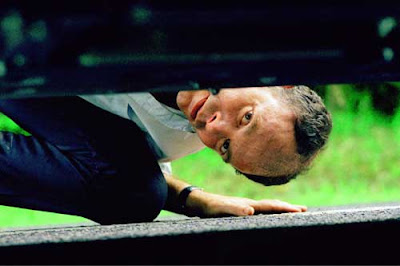 It's interesting to wonder what Hitchcock might have made of this - although Cédric Kahn shows considerable expertise himself with what the French like to call the drame psychologique. The set-up, from a novel by Simenon, is worthy of the master, with an undercurrent of tension from the first moments of apparently ordinary domesticity, and there's a chilly, beautiful wife for good measure. The film opens as a Parisian couple are about to head towards Bordeaux on their summer holidays: the children have been sent ahead to a camp, and papa et maman get on the road at roughly the same time as the rest of France, which doesn't help their already fractious relations.

Jean-Pierre Darroussin is exceptional as the aggrieved husband, skewering a certain male insecurity quite perfectly: he's an inadequate man unable to deal with his beautiful wife's professional success, and his attempts to manage his jealousy are largely self-destructive. The couple's constant car-bound arguments eventually lead his wife to continue her journey alone, when the film takes a much darker turn, as Darroussin first acts out his apparent 'liberation' and then realizes he might have bitten off rather more than he expected. As with Hitchcock, most of the frisson is very much inside the viewer's own mind - and it's made the more powerful by the realism of Darroussin's morning-after predicament. There's a fabulous solo scene where he makes a series of increasingly panicked phone calls, the kind of thing where a lesser actor might start to chew the scenery, while the gathering tension is perfectly managed, and manipulated, by director Kahn.

2005, US, directed by Peter Farrelly and Bobby Farrelly

It's hard to be in any sense objective about such an upbeat movie, especially one that's so squarely aimed at making even the most casual Red Sox fan feel fabulous. Adapted from a semi-memoir by the English writer Nick Hornby - which became, in turn, a humdrum British film - the Farrelly Brothers take the original obsession with soccer and convert it into a full-blown psychiatric condition centered on baseball. The book focused on a key real-life season for Arsenal football team, whereas the directors simply used the 2004 Red Sox team as their backdrop, and happened to be monstrously lucky with the outcome of the season.

The movie starts out firmly in chick-flick territory, chronicling the growing romance between the charming Drew Barrymore and the equally charming Jimmy Fallon, and avoiding most of the usual lavatorial Farrelly Brothers touches. Barrymore's gal pals correctly surmise that Fallon has a deep, dark secret - although the average guy will probably argue that in comparison to, say, Norman Bates, Fallon's hidden side is really quite acceptable. Needless to say, the path to true love is littered with slumps, injuries and walk-off home runs, all of them against a Red Sox backcloth that makes you want to head back to the old ballpark as quickly as you can shout 'scalper'. It's interesting to imagine how they might have concluded the film in the absence of such a fairytale end to the actual Red Sox season (the rumored alternate ending never made an appearance on the DVD).
No comments: 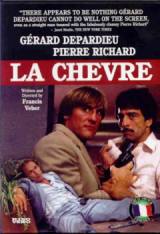 I have a weakness for French comedies - not the arthouse kind that often leave you thinking that 'France' and 'comedy' are two entirely separate notions, but the kind that sets the box office on fire in France. The big domestic comedy hits rarely make it to English-speaking countries - at best, they're remake fodder (this film, which did get a US release, was remade as Pure Luck, with Danny Glover and Martin Short). This was the first of three films starring the tandem of Pierre Richard and Gérard Depardieu, and the biggest hit to boot, one of the most successful of all French comedies. The odd couple are paired up when an industrialist's accident-prone daughter disappears in Mexico and, at the prodding of his company psychologist, he dispatches an equally unlucky employee (Richard) on her trail, along with an old pro PI (Depardieu). The two clash inevitably and incessantly; the (rather repetitive) pratfalls are balanced with more polished wit from the pen of writer-director Veber. The marketing of Depardieu to the English-speaking world from the mid-80's onwards focused on his 'classical' roles in films like Jean de Florette and Cyrano de Bergerac, so it was something of a shock to cinéphiles to see him pop up in trashy Hollywood material later on, but he's balanced low- and high-brow material throughout his French career; the main difference is that Hollywood pays through the nose. Depardieu is fine here: a hulking physical presence with little time to emote. Richard is perfectly cast as the naïf, a character he's played throughout his career to great effect; he gets the lion's share of the laughs, both visual and verbal. The only troubling thing about the whole affair is yet more evidence of Veber's apparent distaste for female characters, also apparent more recently in The Dinner Game (Le Dîner de cons) or Le Placard: women barely appear, and those we do see hardly paint a glorious picture.
No comments:

A near-perfect example of 1930's comedy, this is a mostly light-as-a-feather backstage affair, set primarily in a boarding house for aspiring, and sometimes declining, Broadway actresses (it must be right around the corner from the theatres, since the players routinely leave for work less than an hour before the curtain comes up). Katharine Hepburn is, in a surprising bit of casting, an upper-crust heiress keen to try her luck on the boards; her entrance into a house full of less polished characters, most notably Ginger Rogers, is the occasion for much biting wit on both sides, although as luck would have it everyone slowly learns to get along. There's an undercurrent of melodrama in the house, which becomes overt towards the end - not entirely successfully. Just as the deus ex machina seems entirely too convenient, the film tries to have it both ways; the 'second ending' seems more honest than the first. Whatever the shortcomings of the structure, the cast, well-served by director La Cava, are top-notch: there's barely a wrong note in the whole film, which establishes the diverse characters with remarkable efficiency, and gives ample time to each of a range of fine actresses (Constance Collier is an especially effective scene-stealer).
No comments:

Although it sometimes seems like one of those quintessentially American obsessions, gangsters have been as much of a trope in British cinema as in the US, with a particularly persistent renaissance over the past decade, mostly of the Cockney variety. Sexy Beast leaves the Lock, Stock and Two Smoking Barrels flicks in the shade, however, with a fully realized portrait of a gangster desperate to stay retired from the game, no longer interested in either the highs or lows that come with law-breaking. Ray Winstone is in fine form, exhibiting a much softer, more nuanced side than is usually the case; his character's sincere desire for the quiet life and the love of his wife is almost heartbreaking (the film does nonetheless elide the exact nature of his past career: was he a violent criminal or the fabled 'gentleman thief'?). Into his southern Spanish idyll comes Don Logan, a sociopath with a mission to recruit him for one more job. Ben Kingsley plays Logan in an utterly atypical turn: for an actor best known for quiet force, he's adept with Logan's machine-gun speech and hair-trigger temper (not to mention borderline insanity). It's easy to get caught up in his performance, and lose sight both of Winstone's work and the fine direction, reminiscent, in its focus on the details of speech and atmosphere, of Mike Hodges's excellent Croupier.
No comments: