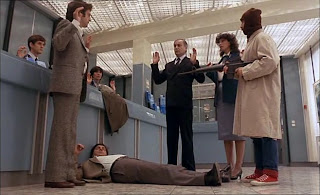 The first big step away from the comedies, mostly derived from plays, that were Patrice Leconte's bread and butter for a decade, Les Spécialistes is a fairly straightforward buddy film, albeit on the kind of widescreen canvas that recalls many of France's biggest comedy hits of the 1960s, most obviously those pairing Louis de Funès and Bourvil. Though they are less comically inclined than such illustrious predecessors, Bernard Giraudeau and Gérard Lanvin make an engaging tandem, their onscreen banter surely a major reason for the film's huge success in 1985; indeed, Lanvin had two huge successes in a row with Marche à l'ombre, directed by and co-starring Michel Blanc, and then this film, but he never re-formed either working partnership.

There's a hint of Bertrand Blier in Les Spécialistes, too, especially in the film's concluding scenes, although there's nothing of Blier's provocative take on sexual politics, and little to foreshadow the richer work that Leconte did at the end of the 1980s and into the 1990s. Still, the pacing is brisk, the location work and stunts often excellent, and the central heist sequence convincingly constructed; in other words, the great majority of the film's original entertainment value has survived the intervening years intact. 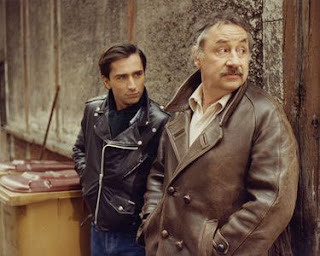 A huge hit in its native country, Les Ripoux is still pretty entertaining as a slice of seamy Parisian life, with an ebullient central performance from Philippe Noiret, but it seems terribly dated in terms of filmmaking technique. While I'm pre-disposed to like Thierry Lhermitte for his exuberant earlier work as a member of the Splendid café-théâtre troupe, he's almost entirely in Noiret's shadow here and there's barely an attempt to render credible the narrative arc that sees his strait-laced young cop make the transition to a rather more flexible view of the law. His character is also saddled with an unconvincing romance plot that regularly prompts director Claude Zidi to crank up the muzak and call for the soft-focus lenses, all of which only underlines how much better the film is when Noiret is front-and-centre. There are pleasures, though, from several of the character actors, especially those playing the film's petty criminals--among them Ticky Holgado and Michel Crémadès, both of whom subsequently incarnated numerous memorable oddballs. 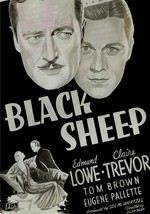 A nifty ship-board film centered on a bunch of card sharps and hustlers, Black Sheep features an engaging early appearance from Claire Trevor. She gives considerable depth and nuance to what might have been a throwaway role in support of Edmund Lowe, whose subsequent career was nothing like as interesting as Trevor's. They make a terrific pair here, deploying their dialog with plenty of crackle. The support cast, as so often in classic Hollywood, is eye-catching in its own right, whether in the form of gravel-voiced Eugene Pallette, Tom Brown (as fresh-faced here as in Judge Priest and Hell's Highway), or Herbert Mundin as a recurring drunken joke, and the resolution is poetically satisfying, particularly for those rooting against the aristocrats.
No comments: 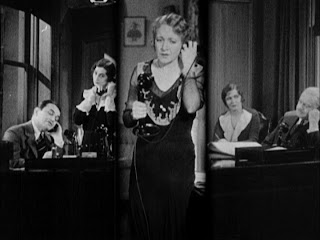 Given the recent revelations about immoral but standard operating procedures in the Murdoch newspaper empire, it's hard to avoid the conclusion that the final shot of Five Star Final is entirely accurate both in its suggestion that such newspapers are true denizens of the gutter - and that they will continue to operate whatever the qualms of an individual journalist or the condemnation of a government. It's only when the buyers turn their backs on the product en masse, as the post-Hillsborough residents of Liverpool chose to do with The Sun, that any meaningful change occurs. The "journalists" at work here would no doubt have found lucrative employment at The News of the World or its American cousins, as they insinuate themselves by any means into the lives of their prey, events then spiraling out of control at breathtaking pace. Although Edward G. Robinson is the film's moral centre, however belatedly, it's Boris Karloff, as a spectacularly amoral hack, who steals the show; the character's personal proclivities and his willingness to smoothly lie his way through any situation roll together, his soft, British tones only enhancing the creepiness of the effect.
No comments: 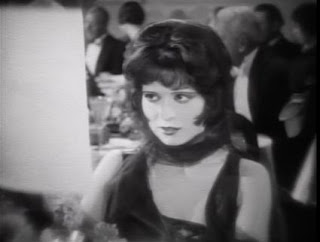 Where I struggled to comprehend the fuss made over Mae West's charms, I had no difficulty understanding just why Clara Bow's star blazed so brightly in the late 1920s: she's almost mesmerizingly charming, completely dominating the screen with her energy. In her way, Bow's character is as single-minded as West's in She Done Him Wrong or Barbara Stanwyck's in Baby Face, but her zestful approach to life is more endearing, if ultimately a similar exercise in social climbing. There's a striking zoom shot near the beginning that's highly unusual for the period - distractingly so at this remove, since I kept wondering whether the zoom lens had been invented that early or whether the filmmakers had used some other trick to achieve the effect.
No comments: 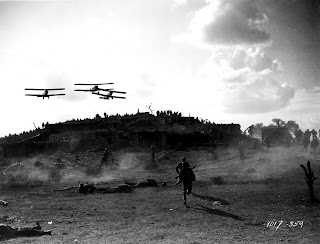 1927, US, directed by William Wellman

I've only seen a sliver of William Wellman's sizeable filmography, and nothing in the last couple of years, but what struck me most here was his mastery of tone, adeptly navigating the switch from comedy in the idyllic pre-war phase through to poignant farewells, dramatic combat action and ultimately, even inevitably, catastrophe. Despite the scale of the production, there's a visual economy to his work, efficiently signaling emotional tone through placement of his actors - Clara Bow and Charles Rogers at play in a tight shot under a car, not a care in the world, followed later by the sober shots of Rogers's rival Richard Arlen and his parents as he prepares to head to war, with the film reaching is emotional high-point in the sequence reuniting Rogers and Arlen late on, the two men joined in tragic embrace at the centre of the frame as signs of destruction surround them.

Wellman displays an extraordinary invention in his shot choices, too, his camerawork often startlingly "modern" to my eye. An early shot of two lovers on a swing has the camera mounted on the swing itself, foreshadowing the woozy shot in Mean Streets where Martin Scorsese attaches the camera directly to Harvey Keitel. More showy still, and yet entirely in keeping with the liberating feel of the sequence, is the wonderful travelling shot through the patrons at the Folies Bérgères. Elsewhere, Wellman simply uses camera placement, rather than motion, to achieve his effects - as in the low-angle shot that emphasizes the enormous bulk of a German bomber.

I saw the film at the Chevalier Theatre in Medford, with live organ accompaniment by Peter Krasinski. His work became such an absorbing part of the action that it was easy to forget there was an actual human being up there near the screen, adding drama and, not infrequently, humour to the visuals. The choice of film was no accident: the Chevalier in question was a wartime pilot from Medford.