There's not a lot to send you home smiling after a viewing of Syriana, irrespective of your politics. It's hard, though, to dispute the central thesis that the vast sums of money to be made in the oil business create great temptations to bend the rules (not a highly original thought, of course). The focus of this film is squarely on the Middle East, and there are multiple storylines, interweaving boardroom shenanigans with the schemes of Saudi princes, as well as the realities, on the ground, for Middle Eastern oil workers. For good measure, there's a CIA plotline, too, with assassinations and under-the-counter arms sales. If all this sounds like Traffic with oil instead of drugs, it's no accident. Stephen Gaghan scripted that earlier film, too, and clearly picked up a few directorial pointers from Steven Soderbergh. At times, it's clear that Gaghan has bitten off more than he can chew: at least one of the plotlines could profitably have been dropped. It's refreshing, nonetheless, to see a mainstream film grappling with big issues and avoiding happy endings (the film also makes excellent use of its location footage). There are several standouts in the large cast, including Chris Cooper, Jeffrey Wright, and George Clooney. The latter's willingness to look bad on camera, particularly in a truly brutal scene of violence, is part of a convincing attempt to chronicle the impact of an especially dirty war on one individual.

Although it frequently flirts with predictability in its plotting, there's much to be enjoyed in this portrait of rural Czechoslvakia during World War II: there's a kind of well-worn charm that goes down very easily, belying the film's two-and-a-half-hour running time. The film opens in 1943 Prague, where medical student Eliska (Anna Geislerová) is involved in resistance activities. When her network is discovered she is ordered to depart for the countryside, in the company of a mill worker, Joza (György Cserhalmi), who lives in the middle of nowhere. Eliska is told that she must marry him in order to remain above suspicion (she's also changed her name to Hana) - as well as to be accepted by the villagers of Želary. She, of course, has no affection whatsoever for this burly stranger. The two fine central performances add considerable depth to what might otherwise be a rather thin affair, at least in its early stages, while director Trojan has an undeniable feel for the rhythms and intersecting personalities of the village. The camerawork throughout is excellent, with the gorgeous rural locations cast in the handsomest of lights. Incidentally, Želary seems to be the latest in a series of films (the best known, though not necessarily the best, being Dark Blue World) in which Czechs examine - or re-examine - their country's role in World War II; it's genuinely interesting to see how the country is portrayed onscreen against the wartime backdrop.

2005, US, directed by Steven Spielberg

As a piece of filmmaking, Munich is technically extraordinary. That Spielberg began filming in June 2005 and had a completed film of this level of accomplishment on movie screens by December is nothing short of astonishing; it speaks volumes for his ability to envision completed scenes prior to rolling the cameras. As a genre film - steeped in the methods and moral ambiguities of ultra-secret services and spies - it's top-notch, with crescendoes of tension and a fine portrait of the intelligence netherworld. However, as a commentary on the events and aftermath of Munich - and on terrorism more generally - the report card is, perhaps inevitably, more mixed. While Spielberg re-creates the events of the Munich Olympics in often brutal detail, the bulk of the film follows a secret Israeli revenge team, assigned to kill eleven Palestinian representatives scattered across Europe. Eric Bana plays Avner, the leader of the team, and through him we see the physical and psychological toll the work takes on the men. It's reductionist to see the film exclusively in terms of the Israeli-Palestinian conflict, for Spielberg clearly aspires to a more universal resonance, a commentary not just on the Middle East, but on the manner in which values of civilization and humanity are compromised through the pursuit of vengeance. It's hardly an original theme - an eye for an eye leaving everyone blind - but there's a real power to the depiction of the growing moral mess in which Avner finds himself implicated. Even with its imperfections, and lingering questions over the actual historical existence of the revenge squads, Munich remains a thoughtful piece of work, one of Spielberg's most intelligent films (while unparalleled as a showman he's often undervalued as a thinker). It also boasts a series of excellent performances, most notably from Eric Bana, who is outstanding, as well as from the Israeli actress Ayelet Zorer as Avner's wife, Daphna. 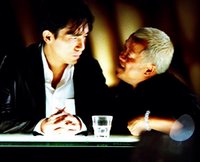 A disappointing conclusion to the Infernal Affairs trilogy: the drop-off from the creditable second installment is precipitous despite the return of the key actors from the first film. The taut action scenes and narrative economy are replaced here by an interminable series of scenes designed to add 'surprises' to the original plot, with some of the developments just plain confusing, even by the standards of this complex series. The greater sins, however, are the insistence on punctuating what minimal tension is created by constantly cutting between plots (skipping months and even years in the process), as well as leaving outstanding supporting players like Anthony Wong and Eric Tsang with so little to do this time around. The slick style of the picture outweighs the much more acute sense of the bustle and drama of Hong Kong that was such an integral part of the first two movies.
No comments:

Woody Allen removes himself from New York and delivers his best film in a decade. It's also one of his least 'Woody Allen' films, playing like a thriller and although it's still wordy, Allen wastes no time in plunging the audience straight to the heart of the action. Chris Wilton, an Irish tennis pro (Jonathan Rhys-Meyers), befriends upper-class Brit Tom Hewett (Matthew Goode), and is drawn into a life of opportunity and luxury. When Chris becomes involved with Tom's sister Chloe, the paterfamilias (Brian Cox) opens professional doors, and before you know it, Chris has a lucrative role in the family business. However, Chris also involves himself with Tom's fiancée, a struggling American actress (Scarlett Johansson at her most breathy), and complications ensue as Chris tries to balance his passions - for women, wealth and status. While the twists and turns of the plot are satisfyingly labyrinthine, the character of Chris Wilton isn't fully convincing. There's no explanation for the choices he makes (at least Tom Ripley is consistently sociopathic), and Rhys-Meyers isn't given a whole lot to do apart from looking alternately pretty and tortured. That said, watching the dissection of the foibles of the British upper class is always enjoyable - they're not, in the end, a million miles from the kind of wealthy New York types more familiar in Allen's films.
No comments:

Good Night, and Good Luck is a fine chamber piece, tightly focused on a specific aspect of the McCarthy era, namely the efforts of Edward R. Murrow (superbly played by David Strathairn) and his production team to cast the Communist witch-hunts of "the junior senator from Wisconsin's" in the harshest of lights. Murrow - through his CBS show See It Now - took McCarthy on towards the end of his reign, although at a time when the senator still retained his ability to smear reputations with no regard for the facts. The film, like Murrow's show, uses McCarthy to hang himself, choosing his more outré on-camera moments to maximize the unsympathetic portrait of this least sympathetic of American politicians (McCarthy's clear discomfort in front of the camera also helped to change, perhaps less positively, the rules for future elected representatives, with telegenic qualities often overriding experience). Clooney very successfully re-creates the sense of alarm so skilfully manipulated by McCarthy for a time - with a clear nod to contemporary American politics - as well as the claustrophobic atmosphere of the television studio (there are brief hints of unseen domesticity, while CBS founder William Paley is seen wandering into the empty studio late at night, as if he has no other life). The carefully re-created debates on how to approach the explosive McCarthy issue recall the smoky White House deliberations of Cuban-missile drama Thirteen Days; both films also boast fine ensemble casts. There's not an ounce of fat in the film, which makes its editorial points with considerable skill without ever overstaying its welcome, while the smooth black and white photography gives a surprising immediacy to the skilful 1950's re-creation.
1 comment:

I have lots of time for Samuel L. Jackson, but you have to wonder about the state of his finances when he pops up in movies like this, which re-cycles old ideas for the hundredth time. Then again, the plot is entirely subsidiary to the chemistry between out-of-town dental technology salesman Andy Fiddler (Eugene Levy) and street-smart Detroit ATF agent Derrick Vann (Jackson), whose paths cross in unlikely fashion when Levy is mistaken for a gun buyer during the course of a sting. Vann more or less abducts Fiddler as he attempts to sort out the mess, which is further complicated by Fiddler's tendency to never keep his mouth shut for more than a second or two. We're seen it all before: it's both the blessing and the curse of Hollywood that even fare such as this passes the time (at least while trapped on a plane) quite capably, while actors of the caliber of Jackson and Levy can't fail to raise occasional laughs, even with weak material. Neither is acting outside his comfort zone, but they do this kind of shtick so well that the often incoherent plot doesn't really matter.
No comments: