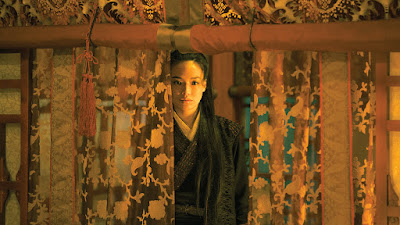 Coming immediately on the heels of a viewing of Come Drink With Me, Hou's film was almost shocking in is use of aspect ratio: gone, at least in the early going, is the wonderful width of the Shawscope frame, in favour of the Academy frame, although this quickly creates a sense of intimacy that's key to the film's atmosphere (and which proves quite effective even used outdoors). The atmosphere and texture are key here; the narrative is tricky to grasp, especially on a first viewing, and I found the brief bursts of action relatively confusing, whereas the use of light and framing are often hypnotic, with a colour palette that sometimes recalls Kubrick's Barry Lyndon, perhaps because both directors were interested in the effects of natural light.

Come Drink With Me

The first of King Hu's wuxia films, in which he developed the template on which he'd expand (in every sense: Come Drink With Me is a good deal shorter than Hu's subsequent career highlights, especially the epic A Touch of Zen). Given that Hu had little enough experience behind the camera, never mind in this specific genre, it's a strikingly confident film, making exceptional use of both exterior and, especially, interior spaces: one sequence set in an inn is a masterpiece of staging, the frame alive with action at various depths (it's also an especially satisfying sequence as Golden Swallow, memorably played by Cheng Pei-pei, showcases her abilities). 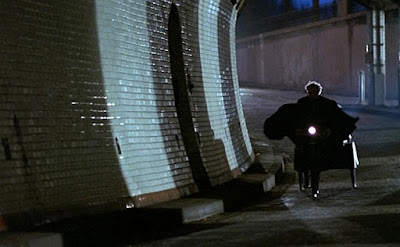 Michel Serrault is very good in the title role, his precise gestures and distinctive phrasing creating a deeply disconcerting portrait of (real-life) violence and madness that seem, in Chalonge's telling, entirely in the spirit of the times, that is, occupied Paris. Whether the locations are authentic to the story or not, they are used to excellent effect to create an atmosphere of desolation and desperation, with the sound design constantly keeping the ear off-balance.
No comments: