Spain's contemporary film production is so dominated, in English-speaking countries at least, by Pedro Almodóvar that it's refreshing to come across a film that eschews his sometimes melodramatic stylings and embraces the gritty realities of a Madrid neighborhood. El Bola (Pellet) is a kid with a rough home life whose friendship with a new kid, Alfredo, seems to offer a form of escape; his friend's unconventional father is especially appealing in comparison to his own authoritarian dad. Although the contrasts between the two homes are occasionally drawn a little too sharply, there's a powerfully humanist impulse behind director Achero Mañas's storytelling, dignifying more than one marginalized character in a manner reminiscent of Benito Zambrano's beautiful 1999 feature Solas. Like that film, El Bola is generally clear-eyed in its view of humanity, steering clear of sentiment while finding a surprising beauty in the small events of everyday life; there's also a powerful critique of the frustrations of ordinary people in their dealings with the irrational workings of officialdom. The performances throughout are excellent: the two young actors who play El Bola and Alfredo are wonderfully natural, and free of the trappings of onscreen cuteness, while Alberto Jiménez is outstanding as Alfredo's father, a part that in less capable hands might well have strained credibility.

For every romantic comedy that works, there's are three like this, where it all falls apart: there's no chemistry between the leads, the supporting characters are no fun, and worst of all, it goes on far too long. While Matthew Perry's shtick was enjoyable on Friends, here he's unconvincing as an allegedly hard-charging nightclub designer, while Salma Hayek's performance is awkward; her line delivery is especially distracting, although the clanging script hardly helps (the writers really have a tin ear for the nuances of dialogue at times). The portrait of the intersection of a warm Mexican family and a chilly WASP clan has some potential as it overcomes the initial clichés, but ultimately the film can't do much with the fact that we just don't care about the central pair.

The third entry in the MI franchise marks a step back up after the silliness of the John Woo-directed second installment; the slow-mo action scenes are mercifully absent, and director J.J. Abrams uses a hand-held camera to capture some of the adrenaline of his TV hits Alias and Lost (his transition to the big screen is pretty successful, too, while his sense of the all-seeing eyes of the CIA-like Impossible Mission Force is of a piece with the mysterious organizations of Alias). This time around, though, the support group is colorless: while Ving Rhames is always enjoyable, his character hasn't developed much from the overgrown teddy bear of previous films, and the remainder of the Tom Cruise-led crew is anonymous. As the villain, Philip Seymour Hoffman has fun, generally refraining from chewing the scenery (it's nice, too, that the film doesn't waste time on a elaborately silly back story; he's bad, and that's about all you need to know).

From Russia With Love 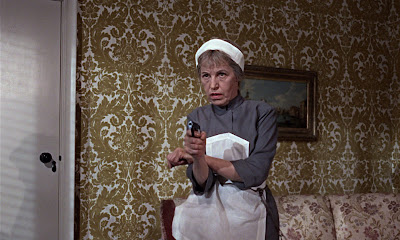 It didn't take long for the Bond producers to figure out the magic formula, for this second entry in the series is probably the best of all the Bonds. Like its predecessor, it's relatively small in scale: although über-villain Blofeld is introduced, the real threats are in the more down-to-earth forms of Robert Shaw and Lotte Lenya, two of the most memorable henchmen in the 40-year-plus history of the films. Shaw is perfectly cast as a blond ex-army man, credibly suave when required, and equally credibly thuggish when the time comes (especially in a great fight scene in the cramped confines of a train compartment). The exotic location this time around is Istanbul, conjured up with plenty of cinematic charm, and an enjoyable performance from Pedro Armendáriz (in his last film role) as Bond's man on the ground. Although Bond has had just one film to establish his reputation, it's clear that SPECTRE considers him the biggest threat to their activities, and they concoct an elaborate false plot to entrap him -- with Bond happy to take the female bait. The comically over-the-top sets, and even more comical killing methods, of later films are absent here, but Desmond Llewellyn makes his first, brief, appearance as Q, a fixture that is one of the most enjoyably playful aspects of the series.
No comments:

As Tom Mes writes in the DVD liner notes to Kanto Wanderer, this isn't as balls-to-the-wall as some of Seijun Suzuki's later work, but it's a great primer on his subversive experiments within the studio system, experiments that would eventually get him fired from Nikkatsu studios. The core of the film is a pretty conventional story of honor and loyalty among thieves, or more precisely the yakuza. Even as Suzuki throws in some reflection on the changing role of the yakuza in post-war Japanese society, there's no doubt he contributes to the romanticization of the old gangster ways, sympathizing with the old warrior types as they deal with the rise of the oafishly criminal new generation. Suzuki is really more interested, though, in playing with genre form: his lovely widescreen camerawork and brilliant use of interior spaces - most especially in the anti-climactic climax - are the beginnings of a path of consistently playful experimentation. The picture of 1960's Japan, on the cusp of a serious boom, is fascinating; the struggle to retain some of the good of the past, even in the gangster context, is sometimes surprisingly poignant.
No comments:

Although it's jam-packed full of allusions to other films, The Nest still manages to feel surprisingly fresh, dispensing with the often hackneyed backstories with which action characters are burdened in favour of delivering elaborately choreographed thrills and spills with considerable style (director Florent-Emilio Siri showed similar technical mastery in his American debut, Hostage). Like Hostage, the film's set-up is complex, with intersecting stories, but Siri sketches the details in efficiently; even though the plot depends on a preposterous coincidence, the action is so breakneck that there's no pause for reflection on this at the time. There are obvious reference points in American films like Assault on Precinct 13 and Die Hard, as well as to such Hong Kong actioners as Hard-Boiled (like that film, it does occasionally beggar belief that a small war could take place in an urban location without anyone noticing), although the first 20 minutes are a homage to the masterful French crime flick Du rififi chez les hommes, with its famously silent heist sequence. While it might seem to be something of a bastard child, there's still a definitely local feel to events, with allusions to crimes in the Balkans and the clever use of a Bastille Day background. Though it is, in the end, slick commercial fare, Hollywood could learn a thing or two from this kind of lean performance.
No comments:

Like many J-horror movies, Cure is concerned as much with atmosphere as it is with conventional narrative logic. Although it has an obvious affinity with the American film Seven, it lacks that film's ruthlessly unspooling plotline, preferring to concentrate on shadings of mood and background. The who and the how of the film's crimes are revealed early on, with director Kurosawa focusing instead on the far more unsettling 'why?' after a wave of inexplicable murders hits an unnamed Japanese city (the Seven comparison is heightened with the use of an anonymous but grimly run-down location: the decrepit buildings, cold weather and trash-covered beaches are the antithesis of the usual cinematic images of Japan). The agent of the killings comes to see like a kind of urban terrorist, arming new weapons in the most insidious and inexplicable of fashions, such that everyone is suddenly a suspect. Although Cure shares a few too many traits with other J-horror films to be truly original - the pacing and atmosphere are similar to films like Ringu, while there's even a video at the center of the mystery - the chilly camerawork and unsettling use of industrial sounds lift the film well above the standard genre confines, while Kurosawa displays a subversive sense of humor at times, perhaps most notably in his perverse choices of music at certain key moments.
1 comment:

After seeing The Break-Up I had to go back and watch the trailer again, having formed the impression that this was the usual 90 minutes of problems and all's-well-that-ends-well template; apart from noting that much of the trailer never made it into the movie, it didn't seem like an unreasonable assumption. Instead, this is about as close to the bone as mainstream Hollywood fare gets - and not necessarily the funnybone, although there are some extremely amusing sequences (often of The Office variety: funny and yet painfully embarrassing at the same time). There's real fire and vitriol here as Jennifer Aniston and Vince Vaughn go their separate ways (onscreen) after two years under the same roof, with extended and nasty fights that showcase Aniston's acting skills (already seen in films like The Good Girl and Friends With Money) and Vaughn's ability to deliver astounding chunks of text with nuance and rhythm (part of what made Wedding Crashers so manically funny). There's good support - and consistent fun - from Jon Favreau and Judy Davis (though you'd wish that an actress as fine as Davis had better parts, she has fun with this one), while Vincent D'Onofrio brings his full bag of tics to the part of Vaughn's older brother, and Jason Bateman does well by the role of the one rational friend the pair has left between them. Some fawned over director Peyton Reed's last effort, Down With Love (enjoyable though hardly original: haven't these critics seen the musical episode of Buffy the Vampire Slayer?), but this is much flatter; the script and a bunch of actors who know their stuff do the heavy lifting.
No comments:

A stripped-down story of a Colombian woman's experience as a drug mule, Maria Full of Grace is a grimly believable account of the realities of the drug industry at the ground level (we never see beyond those immediately involved with preparing the drug-couriering women). Whether in Colombia or in the US, the film rarely leaves the side of Maria (played with great conviction by newcomer Catalina Sandino Moreno), deftly sketching in small-town Colombian life in the opening stages, and giving an equally vivid picture of Queens's Litte Colombia neighborhood later on. First-time director Joshua Marston has a documentary eye for detail, and it's fascinating to be brought into parts of the world (distant and near) that are usually invisible (the intricacies of the mule's tasks are also conveyed unflinchingly). If the film is lacking in any respect, it's perhaps in its unwillingness to more rigorously reflect on Maria's motivations; the drug-running experience comes to seem like a bizarre kind of self-affirmation, as if the consequences can be shrugged off in the headlong pursuit of the American Dream. That somehow seems like a slap in the face of the truly decent people she encounters.
No comments: