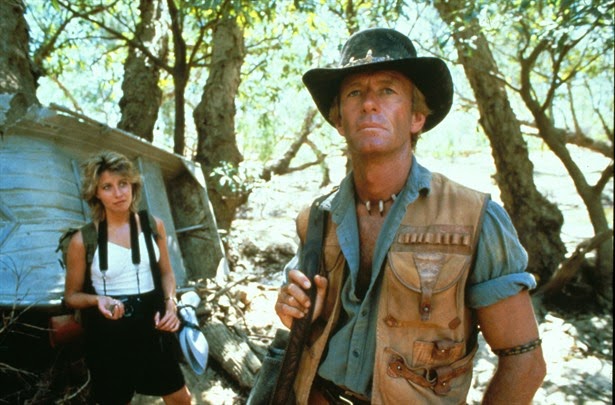 A textbook example of making a film for the global market while retaining some local colour, with everything that implies both negative and positive: Paul Hogan's script does a fine job of collecting and repurposing all manner of Australian tropes (the bushman, attitudes to the law, Aboriginals' status) without actually saying much about any of these subjects except lifting an amused eyebrow, while the film gleefully embraces the sexist/racist/homophobic asides so common in Hollywood cinema of the 1980s. The New York nightlife scenes, in particular, are cringeworthy, though the early going does retain a good deal of charm, especially when John Meillon is on screen.

Man in the Shadow

Jeff Chandler versus Orson Welles hardly seems a fair fight, but Chandler holds his own in this fine example of the politically-minded B picture (though it's a B purely in terms of the lack of top-shelf stars rather than in its ambition). The allegory isn't far beneath the surface, though the politics are still a touch muddled -- even the characters sympathetic to the investigation of a migrant worker's murder aren't quick to use disparaging terminology. The whole thing looks absolutely spectacular: the black and white CinemaScope is used to excellent effect, exploiting both the format's capacity to show the widescreen landscapes and to pack a good deal of information into the frame in sequences on the ranch sets where much of the action occurs.