It's nice to know that at least some people in Hollywood realize that there's no shame in turning out a well-made B-picture, rather than an overfed A-lister that fails to satisfy. There's absolutely no fat in Red Eye's 85 minutes, with Wes Craven signalling his intent in the lean, clever credits sequence. The plot swings rapidly into action as Cillian Murphy - so blue-eyed you know he's got to be wicked - bumps into hotel manager Rachel McAdams (on quite a roll after The Notebook and Wedding Crashers) as she's about to board a late-night flight home. After they share a delay-induced drink, he ends up in the seat beside her on the plane - but we're quickly aware that there's no coincidence, as he needs her management talent to assist in a nefarious plot to off a high-ranking official. It doesn't do well to examine some of the plot holes, but then there's rarely time as the film, with more than a few nods to Hitchcock in the on-plane sequences, zips along. McAdams is a credibly spunky heroine - you'll want to cheer her on as things get hairy - and Murphy seems to enjoy himself no end even when his character is being so comprehensively outsmarted. It's nice to see Craven so clearly in control of his material here: the horrors are more mundane, though no less creepy for that, but the old dog has a few tricks left in him yet, after a string of misfires. 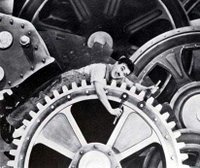 1936, US, directed by Charles Chaplin

It's hard to watch Chaplin's last silent film without an awareness of almost seventy years of criticism and quotation, not to mention dozens of Chaplin biographies. There's no doubting the work of an artist - nay an auteur, given that Chaplin did more or less everything of note, and probably made the tea, too - but often the sense is of an artist frustrated by the very medium in which he excels. While it's easy to read the film as a commentary on the dehumanizing effects of industry more broadly, Chaplin himself felt very acutely the pressures to mould himself to an inflexible Hollywood system, notwithstanding his own wealth and, for the most part, artistic freedom. In a sense, he was fighting against the very collaborative nature of the film industry - a near production line at the height of the studio era - but also the industry's ceaseless pursuit of the dollar. As to the film, it's inescapably a string of - well-made - two-reelers extended to feature length; the famed sequences in the factory work brilliantly as vignettes, while the scenes with the gamin (sic) change the tone entirely. There's plenty of bite to Chaplin's portrait of the humiliations of factory life, although the buffoonish owner is a cipher, while Chaplin is never entirely sure what he thinks about the unions. The final optimistic title card, while absolutely in tune with the American Dream, seems altogether too naïve in the context of the enormous social turmoil of the Depression. It's a fascinating film as an impetus for debate, a clever piece of cinema which sends a very confused message.

The Year of Living Dangerously 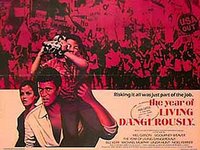 It's hard to know quite what to make of Peter Weir's The Year of Living Dangerously more than twenty years on. There's no doubting the sincerity of the filmmaker's intentions, opening a rare window on to Asian politics with his depiction of events at the tail end of the Sukarno era in mid-1960's Indonesia. However, the realities of life for the Indonesian population generally slip into the background, with the film becoming another tale of (relatively) privileged Westerners in an exotic locale. Guy Hamilton (played by a generally bedraggled Mel Gibson) is an Australian newsman who arrives in Jakarta with a pretty limited grasp of Indonesian politics but perhaps a somewhat greater amount of moral fibre than his colleagues, and he's quickly led to some of the corridors of power by his dwarf asistant, Billy Kwan (the remarkable Linda Hunt), a half-Chinese man devastated by Sukarno's betrayal of the Indonesian population. The core of the film is a tense web of conflicting loyalties, and late-night meetings, which might seem enough on its own, but the film reverts to convention in giving considerable time to the love affair between Guy and a young British Embassy staffer (Sigourney Weaver); their antics at times make light of the very real dangers faced by both westerners and Indonesians as the country unravels. Still, even by comparison with the brilliantly jaundiced The Quiet American (the Phillip Noyce version from 2002), there's much to enjoy here: the plot is as twisted as Indonesia undoubtedly was at the time, with much to say about loyalty and betrayal, and the fine line between the two, all against a suitably sweaty backdrop (with the Philippines standing in for Indonesia). 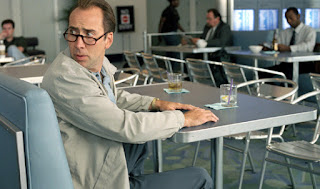 Even after almost thirty years of filmmaking, there's no mistaking Ridley Scott's origins in advertising, nor his continued interest in the visuals of that medium. His Los Angeles is all slick surfaces and bright light, the city's artifice very apparent. Of course, a preoccupation with appearances is perfectly suited to a film about con men. Nicolas Cage and Sam Rockwell play hard-working con men adept at bilking the vulnerable, the gullible, and occasionally the plain greedy, out of their savings, one con at a time. Early in the film, Cage, who suffers from an obsessive-compulsive disorder, discovers that he has a teenage daughter (Alison Lohman) from a relationship that went south years previously, and he attempts to re-connect with her in an effort to add at least some meaning, and perhaps karmic points, to his life. Inevitably, she becomes caught up in some of his scheming, notwithstanding his attempts to keep her at arm's length, and his plans for one last con begin to unravel fast. Cage's part is the kind of thing actors love: the character comes off his meds and exhibits all manner of tics, but director Scott wisely doesn't allow this to become more of a distraction than necessary. Rockwell is all manic energy while Alison Lohman does a fine, lower-key job as the daughter; it's hard to believe she's in her mid-20's. There are plot contrivances aplenty here, but this is a fine bit of genre filmmaking, with performances that were under-appreciated at award time.
No comments:

Avoiding the pitfalls of a full-blown biopic, The Motorcycle Diaries focuses more narrowly on Ernesto 'Che' Guevara''s youth, and his first trip outside Argentina, using his own diaries as the basis for the narrative. In 1952, Guevara (played by the fast-rising Gael García Bernal) and a friend, Alberto Granado (Rodrigo de la Serna), decide to take a trip on Alberto's elderly motorcycle, a journey that'll take them from one end of South America to the other. Guevara is a privileged fellow in Buenos Aires, without a whole lot of experience of the world - the fact that he's a rugby-playing medical student gives a rough idea of his social status in Argentina - and the journey functions as his political and social awakening. There's undoubtedly an element of (self-) mythologizing at work here, but the film is generally a highly convincing portrayal of the first stage of Guevara's political development, and his growing awareness of the breadth and depth of inequality and injustice on his continent. It's also a love story of sorts: Guevara becomes deeply, almost mystically attached to some of the places he visits; those feelings are summed up in a speech towards the end of the film, in which he sets forth his vision of a continent without borders, where common heritage and humanity are celebrated. Director Walter Salles doesn't allow things to become too ponderous, however: there are warm and amusing scenes that evoke the pair's less elevated adventures, with narrow escapes from drunken husbands. Bernal is excellent as the nascent Che, as charismatic here as he's ever been, and there's a large cast of wonderful character actors in support. The South American landscapes, gorgeously shot, have a key role, too, underlining the sense that travel is something that requires effort and endurance to yield its many secrets.
No comments:

1976, US, directed by Michael Ritchie

As the Bad News Bears sequels showed, kids drinking beer and swearing might be funny, but you need a skilled curmudgeon as a foil, and they don't come much more skilled, or more curmudgeonly, than Walter Matthau; he doesn't have to do anything at all, and yet he still seems ornery. For a film about, and enjoyed by, kids, it's striking how his flaws are never glossed over. Matthau's Morris Buttermaker has a mean streak almost to the end, and yet he still manages to achieve a kind of redemption not so much by softening his heart but by aligning himself with the kids against the adult world, handing out beers to his Little League team - to parental consternation. It's a kind of Roald Dahl take on the world, where the rest of the adults are dimissed as stuffed shirts or as malevolent presences (the opposing coach, for example, who slaps his own son). Several of the kids - most of whom never really acted again, outside the Bad News Bears series - acquit themselves well, while Tatum O'Neal is pretty convincing as the ballsy, twelve-year-old female version of Matthau (she didn't make many good movies, but she was at her best working opposite an adult actor). Michael Ritchie was reaching the end of a fairly fertile period in 1976, although this film doesn't have the political overtones of his other work: in his professional hands, the movie remains far more coherent than many a juvenile feature, while his directorial reins are still loose enough to allow for amusing comic bits, especially from the feisty, profane second baseman.
No comments: