My godson came to visit from France this past summer, and brought with him a stack of DVDs curated by his mother, an avid filmgoer and sometime actress. I'm not sure if there was a conscious theme, but I was struck by the prominence of children in all of the films bar one -- and the absence of children was a key point there. Children and parenting are front and center here, with a story inspired by Donizelli's real-life experience of dealing with a seriously ill child, whose father, Jérémie Elkaïm, co-stars. While the film ultimately couldn't quite sustain the running time, the first hour is terrific.

That hour is one of the rare bits of cinema that effectively captures the maddening experience of parenthood, for better or worse: the evaporation of one's free time, the crankiness of existing with limited sleep, the joy in small moments, the emotional whiplash of a child who can be wondrous and unbearable almost at the same time. Not many films capture all of that -- and the sense that it's worth all of the challenges. What makes Donizelli's film especially distinctive, though, is her decision not to hew to an exclusively realist mode: there's a beguiling scene when the two lead actors sing to one another, like something from Demy, though later on the scenes of musical accompaniment do come to seem as though they are padding the running time. Still, like virtually all films dealing with children/parenting these days, I found the film as a whole entirely captivating -- and almost unwatchable during several of the hospital sequences, despite the complete absence of anything that might alarm the squeamish. 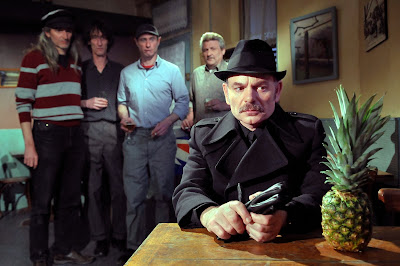 2013, Hong Kong/China, directed by Johnnie To

Though it's as tightly constructed as most of Johnnie To's Hong Kong-based crime films, with an exceptionally intricate plot that rewards careful attention, the overall aesthetic is much less slick than usual, and the early going in particular is thoroughly deglamorized, with grim landscapes and a nothing-left-to-the-imagination depiction of the work of drug mules. Indeed, at no time is the drug business seen to be especially rewarding -- even those who've made it big seem to have serious problems, whether it's the consequences of their activities on family life, their inability to stop themselves dabbling in their own product, or simply the gnawing tension that comes with a life lived constantly in fear of it all coming to an end. All this is not to suggest that the usual To pleasures are absent, though: the pacing is both expert and breakneck, not least because the action is compressed into a couple of restless days. There is also a standout extended set-piece wherein the police manage the many moving parts of a major drug deal to allow themselves to intervene in the action and pass themselves off as criminals, with Sun Honglei, who plays the head police officer, wryly amusing in his dual roles. 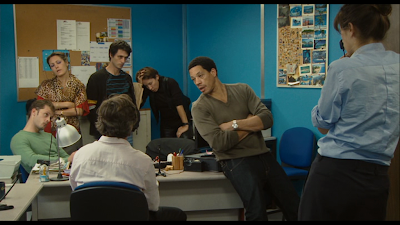 That makes for some excruciating confrontations, particularly given the nature of the accusations, that would seem only to increase the victims' trauma, while it seems entirely routine for police to push the accused, their accusers, and any witnesses around with considerable physicality, in ways that make some parts of the American and British police worlds seem almost genteel at times. You get the sense that Maïwenn is trying to make a broader point about the weaknesses of her country's investigative processes, though it's hard to know just what the viewer is intended to do with any sense of outrage, particularly since the police, as depicted here, take on many of the social burdens of dealing with criminality, allowing the wider public to be shielded from a never-ending stream of trauma.
No comments: 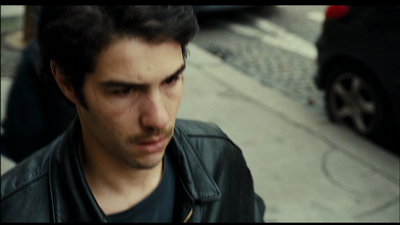 Audiard has never lack ambition -- after getting his directorial feet wet with the retrospectively fairly straightforward character study/thriller Regarde les hommes tomber he quickly took on the Occupation period with Un Héros très discret -- but this still feels more expansive than most of his previous work, partly because of the ample running time and more especially for the attempt to create a comprehensive picture of the criminal underworld, in and outside prison. Indeed, Audiard somehow manages to squeeze a storyline similar to that of an entire season of the French crime drama Engrenages into 150 minutes, compressing time without compromising our understanding of the central character's ambitious progress up the criminal food chain. 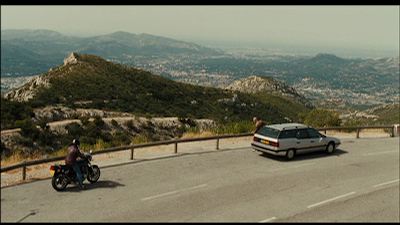 As a portrait of the prison world, it's dispiriting at best: no re-education here, except in the intricacies of criminal methods and leadership, and there are fascinating insights into the creative ways to turn guards and other prison personnel in order to effect special privileges or introduce a variety of contraband. The final shot makes abundantly clear just what we've been watching, and perhaps best exemplifies the central character's Godfather-esque self-image as an essentially benevolent family man presiding over an empire of great financial and physical power -- self-deception being a critical component of such a rise through the ranks, not least in order to deal with some of the more extreme choices he has made.
No comments:

2004, Italy, directed by Paolo Sorrentino (aka The Consequences of Love)

Paolo Sorrentino's films, like those of Apichatpong Weerasethakul, make a fine argument for returning to similar themes and styles if there's more to be mined from those ideas -- Il Divo shares a lead actor, a bravura style, and a tone with Sorrentino's earlier feature, for instance, but there's no sense of a director simply spinning his wheels. Sorrentino is even able to reproduce a similar scene without it seeming stale: here, a particularly serious moment is accompanied by a rendition of the Ornella Vanoni pop song Rossetto e cioccolato, just as Il Divo features a wonderful sequence intercutting the lead character with a performance of a soaring Renato opus. Perhaps it's a personal sensitivity, but the rhythms of his scenes, where a great deal of the communication and effect are wordless, seems to work especially well for me -- there's a hypnotic quality to his camera movements, prowling corridors over and over (à la Marienbad, with similar dreamlike effect) or unexpectedly rising over the crown of a character's head, revisiting and insistently reworking the same perspectives to give us a sense of a most unusual, cloistered life.